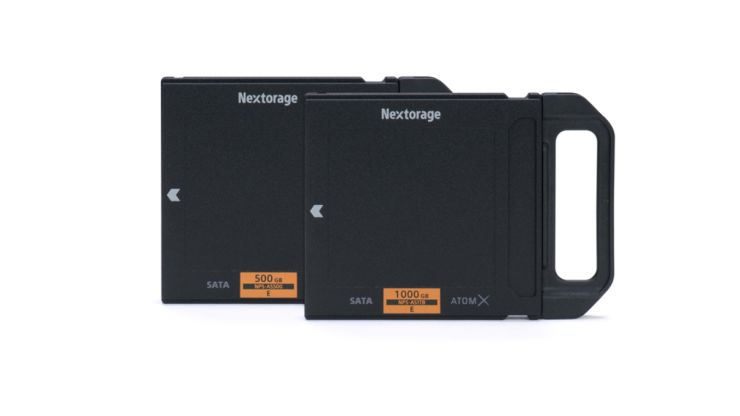 Atomos has collaborated with Nextorage to produce the new Nextorage AtomX SSDmini. These drives which are available in 500GB and 1TB capacities are claimed to have been designed specifically to maximize performance and reliability for Atomos recorder devices.

According to Atomos, ‘The Nextorage AtomX SSDmini represent the gold standard in performance and reliability, to provide a recording solution that can be relied on with absolute confidence.”

The Nextorage AtomX SSDmini is 20% smaller than conventional 2.5mm SSDs so that they can fit directly into the media slots of the Ninja V, Ninja V+, and NEON monitor/recorders. They also come with an optional handle so you can adapt them for use with the SUMO 19, NINJA CAST and SHOGUN Studio 2.

The housing is constructed from die-cast aluminum. It is claimed to be shock-resistant (up to 1500G/0.5ms), and able to survive extreme temperatures. Nextorage states that they have also been designed to dissipate heat during operational use so that it is safe to use for long extended periods of time. The Nextorage AtomX SSDmini fully supports SMART data, allowing future AtomOS drive health monitoring.

What is slightly strange about this announcement is that Angelbird already makes 500GB, 1TB, and 2TB co-branded SSD drives in the exact same form factor. The Angelbird AtomX SSDmini (500GB) reatils for $199 USD, the 1TB version costs $399.99 USD, and the 2TB versaion is $549.99 USD.

The firmware of Nextorage AtomX SSDmini has also been tuned to support sustained transfer rates required by modern formats (550MB/s read and 500MB/s write). This is hardly fast in 2021, but it is fast enough to sustain 8k 30p ProRes recording on the Ninja V+.

Nextorage is providing a reassuring 3-year-warranty for the AtomX SSDmini. No registration is required. 3-year-warranties are nothing special, as lots of manufacturers offer similar warranties on their SSDs.

Learn more about the Nextorage AtomX SSDmini on the Atomos website.

The 500GB SSDmini retails for $229 USD. The 1000GB SSDmini reatils for $439 USD. This actually makes them slightly more expensive than the Angelbird versions.

Neither version of the Nextorage AtomX SSDmini is available. All it states is coming soon on the Atomos website.