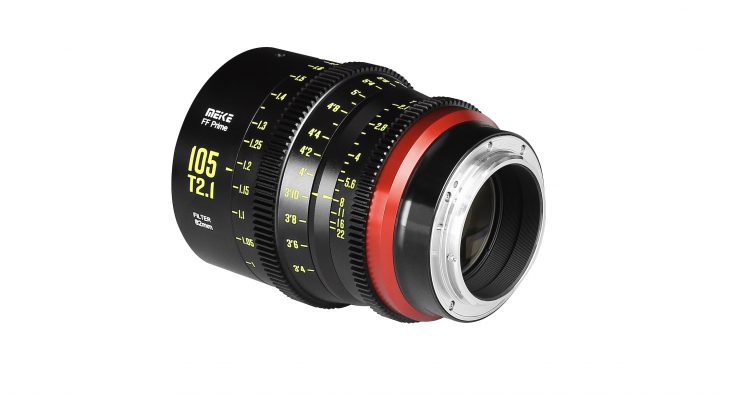 The lens has an 82mm front filter diameter so you can easily attach common-sized filters. The front diameter of the lens is 85mm. This allows you to use some clamp-on matte boxes with the corrector adaptor ring.

The minimum focusing distance is 1m (3.28′). This is not overly close, but it is fairly standard for a lens with this focal length.

The lens has a focus throw of 330 Degrees and both the iris and focus ring feature industry-standard 0.8 pitch gears. It is possible to manually pull focus from infinity to the minimum focusing distance in one go, despite the large 330 degrees of rotation. This is mainly because the physical size of the lens barrel isn’t that big. Again, this is something that will make it appeal to solo shooters.

The optical construction of the lens consists of 11 elements in 7 groups and it has 11 aperture blades.

MEIKE will be releasing more focal lengths going forward. The planned set will include:

There is quite a lot of competition in the full-frame cinema prime marketplace, especially for lenses that come in either PL or EF mount. This makes choosing a cine prime lens a very difficult task.

As far as affordable Canon EF or PL mount cine prime options are concerned, the DZOFilm VESPID 100mm T2.1 lens would be the direct competition. It has the same T-stop, however, it costs $200 USD more.