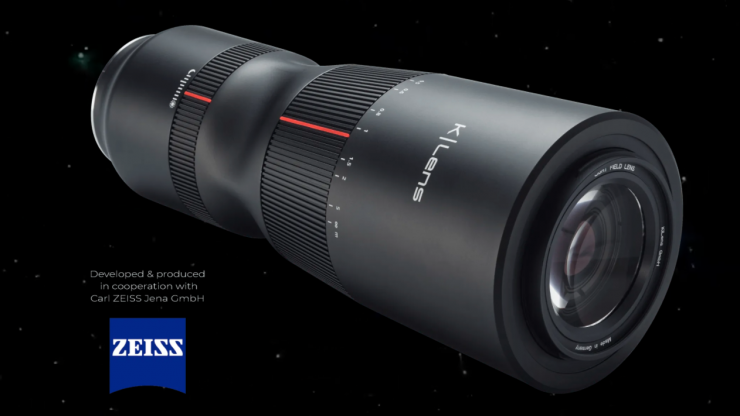 The K|Lens One is being touted as the world’s first Light Field lens. The lens is capable of capturing depth information and rich light field data. In Layman’s terms, it essentially allows you to shoot in 2D but then create 3D images.

It can be used with all standard full-frame cameras and provides you with additional data besides a picture or a video. These Rich Light Field Data are depth maps, but also different perspectives of a scene taken at the moment of shooting. The K|Lens works similarly to the multi-camera system of a smartphone, only with more viewing angles, a high-resolution sensor and high-quality glass optics.

The K|Lens One works with full-frame cameras and you can use it for either still or video capture.

The lens is developed and manufactured in cooperation with Carl ZEISS Jena GmbH. Further focal lengths are scheduled to become available in the future.

What is the difference between the K|Lens and the Lytro Illum?

The Lytro Illum was based on a completely different technology that used a microlens array in front of the image sensor that generated a very high number of low-resolution perspectives. This required the development of Lytro’s special camera, in which a human-viewable image is created only after further processing by special software. Due to the complexity of the technology, the final resolution of the images was greatly reduced, unwanted artifacts could often not be excluded, and further processing was only possible in Lytro’s own post-processing suite.

The K|Lens One is compatible with all camera types and existing software tools. Due to the very simple optical system, complete perspectives are generated without further processing. Due to further developments in computational photography, much more stable methods of depth calculation, resolution increase and avoidance of artifacts are available today.

Another difference is that you can always work with K|Lens One images regardless of the software. This is because images taken with the K|Lens One are captured in RAW or JPG format. Also, K|Lens One offers software as a downloadable file, which means you are not dependent on its servers (as was the case with Lytro).

While this all sounds great, capturing and processing images isn’t quite as straightforward as you may think. There are a few steps and caveats that you need to be aware of.

The way it works is that the depth in space of every single pixel in every image or video frame is calculated for you. That resulting depth information is given to you as depth maps, depth channels and/or point clouds, as well as your standard RGB image or video.

A mirror system (Image Multiplier) in the K|Lens splits the light rays into 9 separate images that are mapped on the camera sensor. All 9 of these images have slightly different perspectives. The best way to picture it is if you imagine using 9 separate cameras in a narrow array at the same time.

The 9 perspectives that are recorded with the K|Lens One on the sensor work through the parallax effect. You can think of it as closing and opening your right and left eye alternately, and seeing how objects in your vision seem to change position. With the K|Lens One, the closer an object is to the camera (or away from your eye in our example), the more it “jumps” back and forth compared to the background. K|Lens One uses this principle mathematically to calculate the depth of each pixel in the images.

If you add up the depth of each pixel in an image, you get a kind of map that gives the image extra information from a different dimension. The resulting map is called a depth map, a z-map, or a z-buffer. When working with video, it is called a depth channel, or a depth pass.

With K|Lens One, the Kaleido-image of 9 slightly different perspectives of the same scene is displayed on the camera sensor as well as the viewfinder. Because this would be bizarre and confusing to look at, K|Lens One has programmed a dedicated external monitor to display only the center view perspective. This makes the shooting process much easier and less confusing.

The external monitor does come as part of the overall package, but it does mean you have to hook it up and drastically increase your camera’s footprint if you want to use the lens.

With this depth information, you’re no longer limited to accessing your image or video in just two dimensions, instead, you can include the depth and use it for any further processing steps.

Now, you don’t just take a picture and magically get a 3D image. You need to use dedicated software (it comes free with the lens) that calculates depth information so you can then use that information for post-processing.

K|Lens One’s software is called DeepSea. DeepSea is essentially an image organizer that allows the user to create depth maps for their photos, and depth channels for their videos. It also lets users export all this data and continue working in any third-party post-processing software.

The DeepSee software allows you to see the original Kaleido image in JPG and RAW formats and nine individual images with slightly different perspectives as JPGs. At the moment of capture, the resolution of the image is reduced to one-ninth of the sensor resolution. However, since nine views of the scene are available, each offering different content, these can be processed together using a Multiview Superresolution process, so that at least 50% of the sensor resolution is achieved in the color image.

The photos and videos created with the K|Lens will work for all 3D displays, be it stereo, holographic, or light field.

K|Lens One is a German startup that was founded in 2016 by a group of computational photography enthusiasts.

K|Lens One will be available on Kickstarter this month.

The recommended retail price of the K|Lens One including software and accessories is expected to be 3,599 EUR (approx. $4,200 USD).

Please be aware that the expected delivery date will be about half a year after the project becomes fully backed. As always, Newsshooter encourages you to think long and hard before backing any project on a crowd funding platform as there are no guarantees that you will ever see a product that you have backed.