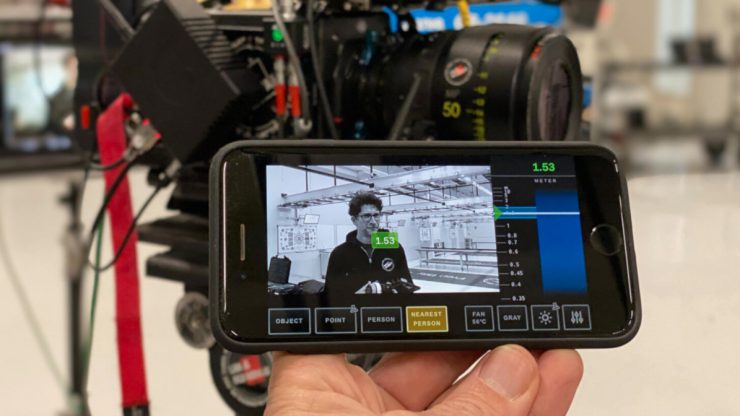 Moon Smart Focus is the world’s first distance measuring tool with advanced AI technology. It has been specifically developed as an additional tool for a 1st AC/focus puller.

Yes, there are other distance measuring tools out there using similar technology, but to my knowledge, none of those work with high-end lens control systems. DJI has its new LiDAR system, but that only works with their Ronin 4D. This solution can work with just about any digital cinema camera and cine lens combination.

Moon Smart Focus can detect and track up to four people in real-time and send those distances to select follow focus devices. The data can be used to take distance markings, assist with manual focus, or be used as a type of auto-focus for difficult and/or moving shots where manually pulling focus could be extremely difficult.

The concept behind Moon Smart Focus is to help streamline workflows so difficult focus pulls can be more efficient, and rehearsal times can be significantly shortened. To be clear this system isn’t designed to replace a focus puller/1st AC, it is simply another tool that they can use. The aim is that any 1st AC/focus puller using Moon Smart Focus can speed up their productivity when the system is combined with their favorite focus controllers such as an ARRI Hi-5/WCU-4 or cMotion cPro.

Benefits for the Production:

The purpose of Moon Smart Focus is to free up time for more creative work.

A depth sensor mounted on the film camera provides depth-map with accurate distance to all objects in the frame. AI-based algorithms will detect actors, track their eyes and display the distance shown as labels on the Moon Smart Focus app.

It is best to imagine Moon Smart Focus as a virtual tape measure attached to the closest eye of every actor in frame at all times. Objects and bodies can be tracked too.

The target distance can be sent to any high-end lens control system over serial, giving the focus puller access to real-time distance data delivered as live markers. The system has been successfully used with cMotion cPRO, ARRI Hi-5, WCU-4, and Hedén Ymer-3, but any high-end focus controller can be connected.

It has a 15W (Lemo 4 Pin) and it can be mounted via V-mount or cheese plate with inserts.

It can be mounted via a 3.5mm insert on the film plane like a Cinetape / UDM-1 rangefinder.

How do you control Moon Smart Focus? Settings and advanced control can be accessed over Wi-Fi on an iPhone. The app can be used to show distance to any point within the 120° wide angle FoV. This allows for the ability to capture actors outside the film camera lens FoV.

There are three tracking modes you can choose to use:

Object Tracking Mode is used to measure the distance to any surface. The distances are updated in real-time at 30 fps. It can also be used for taking marks faster. This mode is suitable for both long camera moves or micro-adjustments in scenes with shallow depth of field and where a camera is moving.

The Person Tracking Mode is used to detect people in a frame and measure the distance to their eyes. This allows you to confidently track up to 4 people in real-time and create dynamic markers. With the help of the Moon App, you can specify a specific person by tapping on their target and then those distances are sent to your follow-focus system in real-time.

Nearest Person Mode automatically selects the nearest person and sends the distance of their eyes to the follow focus device. This mode is good for when you cannot or do not want to use the Moon App, or you are unable to use Wi-Fi. This mode is claimed to be faster and smarter than the market’s leading rangefinders that measure the distance to the nearest point, not to the eyes.

Point Mode can be used as a conventional range finder. This mode allows you to get the nearest distance to the center point. As a bonus, you have the option to freely place this point anywhere on the screen.

NOTE: All features under development and specific functionality and/or naming might change before the final version is launched

How do you connect it up?

A serial cable and an ARRI LCUBE CUB-1 are used to connect to a cMotion cPro or an ARRI Hi-5/WCU-4. These receive distances via serial cable in the same way as a CineTape or ARRI UDM-1 rangefinder.

Moon Smart Focus can also be connected directly to a Tilta Motor. Mapping of the lens is then done directly in the Moon App.

Currently the Moon Smart Focus is in the final stages of testing, It has had an extensive amount of beta testing and it was used on Lars von Trier’s “The Kingdom – Exodus” that was shot on location in Copenhagen. The system is also about to make its debut on an American production that is to be filmed in Budapest this fall.