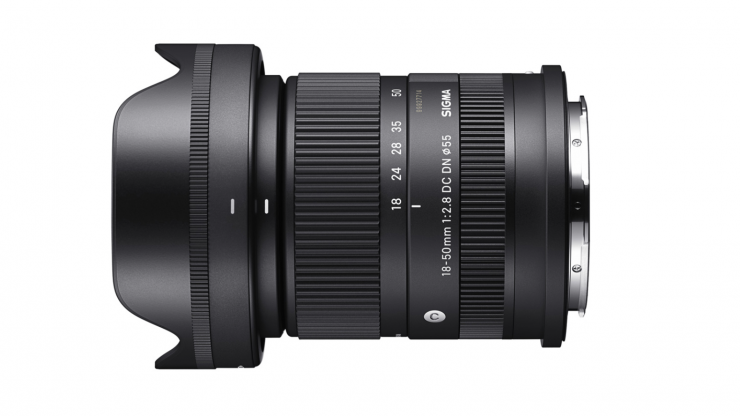 Sigma has announced the 18-50mm F2.8 DC DN | Contemporary. This is a mid-range zoom with a constant F2.8 aperture throughout the zoom range.

The lens is less than 3″ / 7.45cm) long and it weighs just over 10oz / 290g. According to Sigma, this makes it it is the smallest and lightest F2.8 standard zoom for crop-sensor mirrorless cameras on the market.

To keep the lens as light as possible, SIGMA constructed the body from a polycarbonate called Thermally Stable Composite (TSC) which is robust, and importantly has a thermal conductivity close to that of aluminum. This ensures stable performance and good operability when used in changing temperatures. By deliberately using metal for some of the internal structure, the parts could be much thinner and have a higher rigidity, ensuring the lens can stand up to frequent, heavy use.

The lens barrel does extend when you zoom the lens.

The lens has a minimum focusing distance of 12.1cm / 4.76″. The optical construction of the lens consists of 13 elements in 10 groups (1 SLD and 3 aspherical lenses) and it has 7 aperture blades. The front filter diameter is 55mm.

As far as other lenses with similar focal lengths go, Sigma makes the 17-50mm f/2.8 EX DC OS HSM Lens for Canon EF, and there is also the Nikon AF-S DX Zoom-NIKKOR 17-55mm f/2.8G IF-ED Lens and the popular Canon EF-S 17-55mm f/2.8 IS USM Lens. All of those lenses are designed for DSLR and not mirrorless cameras.