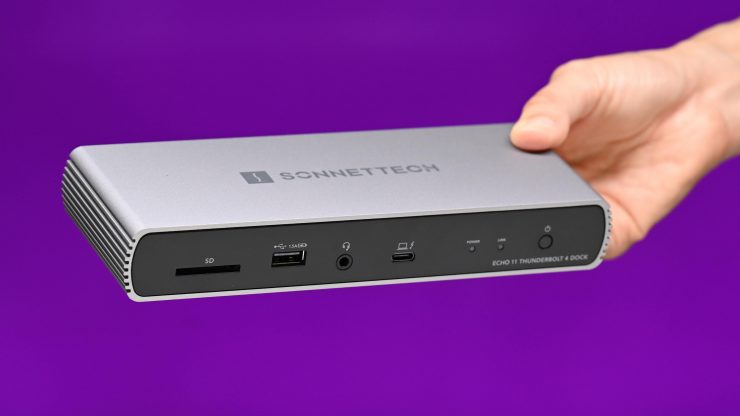 Earlier in the year Sonnet announced its Echo 11 Thunderbolt 4 Dock. This Thunderbolt 4 docking station features four Thunderbolt 4 ports as well as providing up to 90 Watts of charging power to portable computers. Oh, and it also offers 8K display support.

The trouble with a lot of computers these days is that they can be lacking when it comes to connectivity. I always find that I never have enough inputs available on my computer and that’s why a good hub can make life a lot easier. I use an iMac Pro as my main computer, and like all iMacs, the ports are all on the backside of the computer. While this creates a nice clean look it is a major inconvenience trying to plug in peripherals.

The Echo 11 Thunderbolt 4 Dock comes with the following items:

It is nice that Sonnet gives you a Thunderbolt 4 cable as standard. Yes, this is a small thing, but at least you don’t have to try and source your own.

The power supply that does come with the Echo 11 is fairly large and heavy.

As you would expect from a dock with so many inputs, the Echo 11 Thunderbolt 4 Dock does take up a fair bit of real estate. It isn’t overly deep, but it is quite long.

I have owned quite a few Sonnet products in the past, including their original SxS card reader which I used with my Sony F3. I also use their very good SF3 Series CFast 2.0 Pro Card Reader to ingest material from my main camera.

The Echo 11 Thunderbolt 4 Dock is solidly made and well constructed.

With Thunderbolt 4 ports you can daisy chain up to a total of five devices.

The Echo dock’s 10Gbps USB Type A ports support the vast majority of USB peripherals, including superfast USB NVMe SSDs, at up to full speed. Unlike some other docks, each port on the Echo 11 provides up to 7.5 watts of power to ensure bus-powered devices will operate without fail. The included Gigabit Ethernet port is perfect for connecting broadband internet directly to the user’s computer without another device competing for bandwidth on their WiFi setup.

The SD card reader reads the latest SDXC UHS-II memory cards at up to 300 MB/s.

The Echo 11 connects to your laptop or computer via Thunderbolt 4, which can also provide up to 90W of charging power.

Now, on a Mac, you need to be running macOS 11.1 or higher, or otherwise, the dock won’t work.

The Echo 11 is virtually plug-and-play if you are using it with a Mac. The standard drivers for the Echo 11 are already part of macOS 11.1 or higher. This means you can simply plug it into your computer and power it up.

The dock is pretty straightforward to use, however, as it has inputs on both the front and the back you have to think carefully about where you position it on a desk if you are working with a desktop.

If you want easier access to most of the ports I personally found it better to turn it around and have the backside of the dock facing towards me. No, this isn’t as clean, but I did find it more practical. The whole reason for wanting to use a dock with a desktop is not only for the added connectivity but also for the ease of access.

I wanted to see how it would perform if I loaded it up with devices and also had it powering a laptop.

I had the following items connected up:

Everything worked flawlessly without any issues.

I also did some speed tests on the connected drives and all of the drives were working at the speeds I was expecting to see.

The only real downside to docks is you can certainly end up with a spaghetti mess of cables and connected devices. A lot of peripheral devices these days come with very short cables and that doesn’t help when you are trying to connect devices up to a dock.

Direct competition comes in the form of the yet to be available OWC Thunderbolt Dock ($279 USD).

It features three Thunderbolt ports and four USB ports that allow you to connect to past, present, and future devices. You can also connect up to two 4K displays or a 5K/6K/8K display, high-performance storage devices including NVMe SSDs, A/V mixers, phones, tablets, even desktop accessories like a keyboard or mouse.

The Echo 11 Thunderbolt 4 Dock certainly works as advertised and I was very happy with the added versatility and usability it added to the way I work. Being able to plug in a variety of different hard drives and have them all work at their maximum performance levels means you don’t have to compromise on speed when using lots of drives at once.