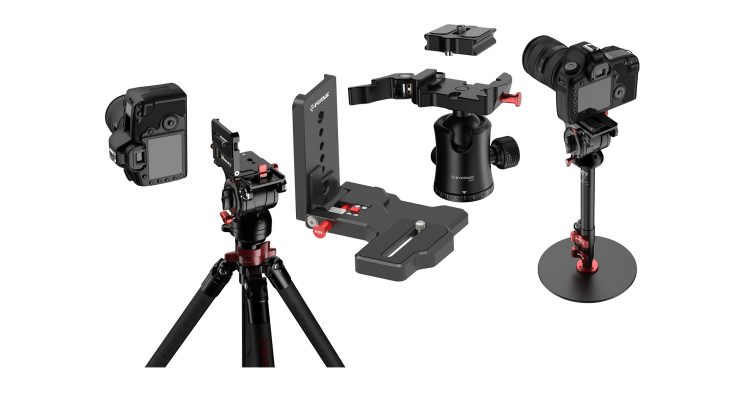 iFootage has been busy releasing new support products this year, and today they released a few more. The Cobra 2 Round base, M30 Ball Head, and two quick-release L plates, the LP-01 for vertical and the HV-01 that is designed for the Komodo K5S for quickly going from landscape to portrait modes.

The RB-A300 & RB-A200 are round base plates for the Cobra 2 monopod series. Each model comes with a two-section monopod. These monopods are designed for attaching and supporting a camera head, microphone, light, monitor, or phone holder. The base sits flush to the surface and has a small form factor.

The RB-A200 is 27cm or 10.62 inches tall at its minimum height and extends to 56cm or 22 inches at maximum extension. It’s designed primarily for table or desk use with a camera, smartphone for streaming, a microphone, or small light.

Just make sure you don’t put a heavy load on and make it top-heavy. The small footprint makes it much easier to use on a desk with limited extra space. Most light stands take up a lot of space and are generally too tall. Add a small shot bag or the iFootage Water Bag designed for the M1/M5 Mini Crane to fix stability. The water bag fits nice and clean and won’t slide off since the extension tube inserts in the middle of the water bag.

The top base plate has both 1/4″ & 3/8″ screw threads and is compatible with most cameras and camera heads.

The M30 ball Head includes a quick-release system that works with other iFootage kits like the new smartphone holder and 50mm iFootage plates. The ball consists of a camera plate with a 1/4 20″ screw to mount to a mirrorless camera or other items such as a light or microphone.

The maximum payload for the ball head is 3kg (6.31 pounds), making it an excellent option for hybrid mirrorless cameras. The quick-release base is removable. Two 4mm hex screws hold it in. You can mount the iFootage Sea Star directly to the ball head and lockdown with the two grub screws.

The pan has a bit of dampening to it so you could use it for video in a pinch and get a smooth pan or for panorama shots. Measurements are present on the base to make repeating the shot easier.

The LP-01 is an L plate that folds flat for easier packing. It’s designed to use with the Shark Slider Nano for verticle shooting and can be mounted to the M30 Ball Head with the quick release system as the mount is also a camera QR plate. On the sled is where you can mount the camera with a 1/4 20″ camera screw. The LP-01 isn’t large enough for cinema cameras.

To lock in the “L” position, there is a small red square button that locks into place when pressed. To release and fold the plate, another button on the side is pushed in.
The mounting plate has several 1/4 20 and 3/8″ taps for mounting onto the Shark Slider Nano platform or other devices.

The L plate can be mounted directly to the Komodo K5S deck without an adapter.

All these new products arrived a few days ago, and I’m I the process of reviewing them. But I need more time to play with them. The Cobra 2 Round Base Monopods are very cool, and I can see how useful they can be just as long as you know the limitations. With streaming being a big part of everyday communication having a camera or lights on a desk or table makes the setup much cleaner. More testing and reviews are coming soon.