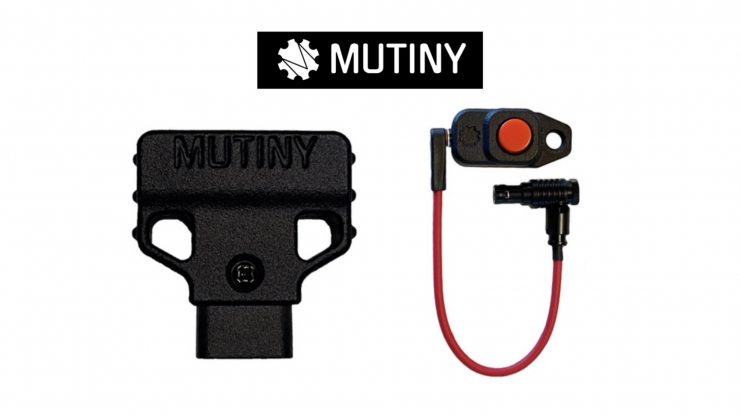 Mutiny has announced two new camera accessories, the Bolt On Micro Record Button and the V-TAP.

The Bolt-On Micro Record Button was designed for use with the RED KOMODO, V-RAPTOR, and Phantom Flex. According to Mutiny, it is the first bolt on camera trigger in the world and it addresses a lot of usability issues, especially for KOMODO users. The Bolt On Micro allows your trigger button to be mounted just about anywhere on a camera cage or handle which is a big improvement over the built-in record button.

The record button has a removable cable which allows it to be rigged in almost any way. It will also work at distances of up to 1200’ / 365.76m for remote triggering.

The record button body has a 3.5mm TRS jack and comes with either a 6″, 12” or custom length cable that terminates to either Fischer 3 (for use with Mutiny IO, Thompson Visuals Storm Box Pro, or Wooden Camera D-Box for Komodo), EXT 9Pin (direct to Komodo/V-Raptor) or BNC for use with the RED Expander Module, Phantom Flex, and other GPIO devices.

Mutiny’s other new product is the “V-TAP” for D-Taps. The V-TAP is a simple and easy way to monitor battery voltage without taking up camera real estate.

Mutiny put a voltage meter into a D-Tap connector so that users can easy battery monitor devices that do not have an external battery readout or an easy eyeliner for monitoring.

It will work well for use with products such as the Movi Pro, RED KOMODO with aftermarket batteries, Kessler Cineshooter, and Steadicam rigs, etc.

The Mutiny V-TAP has two tether spots allowing you to tether it or easily find it in your camera case when attached to the included Red BongoTie. The V-TAP retails for $50 USD and is available in the Mutiny store and via worldwide dealers.