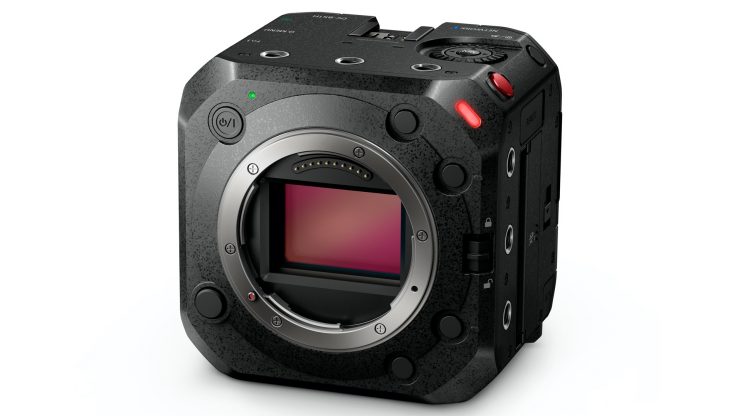 It’s basically the S1H in a box camera. Panasonic claims that the new camera has excellent low-light performance and a wide dynamic range of 14+ stops and V-Log.

The camera should work well alongside other Panasonic LUMIX cameras, such as the BGH1 or the S1H. Not sure if the current GH5 II will and the upcoming GH6. This model has me more interested as I’m not a big fan of the M.F.T. sensor. Going with a modern Lumix full-frame sensor from the S1H is much more enticing. Let’s take a look at the features of the BS1H.

With Dual Native, ISO noise will be reduced by choosing an optimal circuit according to the sensitivity before gain processing. In combination with signal processing by the Venus Engine.

The LUMIX BS1H uses colorimetry of the VariCam lineup of Panasonic cinema cameras for accurate colors and rich skin tones.

Panasonic states the LUMIX BS1H delivers 14+ stops of Dynamic Range with V-Log. V-Log/V-Gamut provides a high dynamic range and broad colors and creates a greater level of play for the images in post-production processes.

The LUMIX BS1H’s CMOS sensor has V-Gamut, which is the camera’s optimum color space and achieves a wider color space than BT.2020. In addition to HDR (High Dynamic Range) video recording, the camera records video with a gamma curve compatible with ITU-R BT.2100. You can now choose Hybrid Log-Gamma (H.L.G.) in Photo Style.

The LUMIX BS1H also provides real-time subject detection with an advanced deep learning technology to set precise focus on the target subjects such as humans and animals, even moving at fast speeds.

The camera is capable of 4:2:2 10-bit 4K 60p/50p HDMI output and has a new heat dispersion structure that allows for unlimited video recording in various recording formats without overheating issues and features a 4:3 Anamorphic mode.

There are no internal Raw options; however, you have two external options. Apple ProRes Raw with the Atomos Ninja V and Blackmagic Raw with the Blackmagic Design Video Assist 12G HDR records. 5.9K, 4K / [Anamorphic (4:3) 3.5K] 12-bit R.A.W. video can be output over HDMI as well with both recorders.

Combined with either the Atomos Ninja V or Ninja V+ the LUMIX BS1H will be capable of recording up to 5.9Kp30, 4.1Kp60, and 3.5Kp50 anamorphic ProRes RAW.

The BS1H is capable of capturing still images as well as video. Here is what it can do:

The Boost I.S. Image Stabilizer can be used, and AF/AE control is available when the LUMIX S Series lens with O.I.S. is used. The SiH has much-improved autofocus and is a good upgrade with the BG1H.

I like the idea of a full-frame sensor. It’s a good upgrade, especially if you already have LUMIX S Series lenses. Unfortunately, it doesn’t have internal ND filters. That would be a good upgrade as well, but it would increase the size of the camera in order to fit the mechanism.

The battery appears to be the same Panasonic AG-VBR Series that is used with the BGH1.

I keep thinking about Panasonic’s cinema line and how it hasn’t grown over the last couple of years. Seems the focus is more on Lumix cameras. Will we see a new Varicam soon? I like the look of the camera but it is a beast. It would be great to see a smaller lighter version. The EVA1 didn’t take off so maybe Panasonic is in the redesign phase. If the BS1H takes off with the full-frame sensor I would think a more robust version could be in the works.