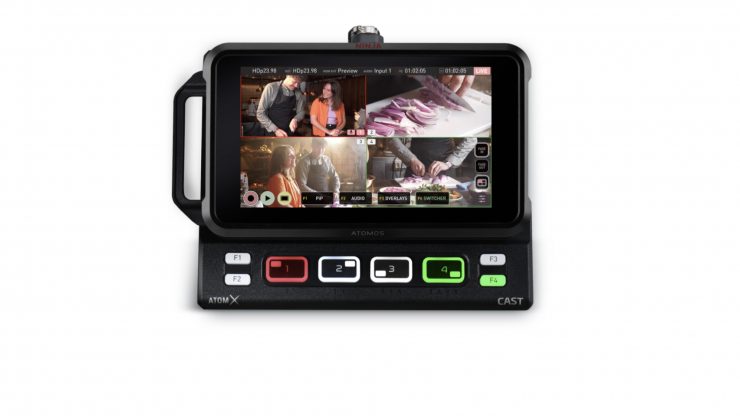 The Atomos AtomX CAST is finally shipping. This product was announced back in June this year, but it is taken a lot of time to actually become available for purchase.

You can now also purchase a Ninja CAST bundle, which is a combination of
the Ninja V and AtomX CAST.

If you are not familiar with the AtomX CAST, it is a modular component that has been designed to be used with the Atomos Ninja V or Ninja V+ monitor recorders. Essentially, it utilizes the AtomX expansion port on the Ninja V/V+ to transform your device into a multi-input switcher.

The whole concept behind the AtomX CAST was to create an easy way for anybody to create broadcast-quality multi-camera programs. You could also use it for online meetings. By adding an AtomX Cast to your Ninja you can create an all-in-one live switching and streaming solution

The AtomX Cast gives you 4x HDMI inputs and physical buttons. This allows you to connect cameras, computers, consoles, pre-recorded content sources, or any valid video source, and use the touchscreen or the buttons to ‘switch’ between sources and select which source should be on screen at any one time for broadcast.

The Ninja CAST (the AtomX Cast & Ninja V/V+) appears on your computer as a high-quality webcam, so it works immediately with all video applications like Zoom, Microsoft Teams, and Skype as a UVC input without a need to install drivers on the computer. According to Atomos, there’s no need to worry about synchronization, as you can mix and match frame rates as well as interlaced and progressive HD sources automatically.

The Ninja CAST features the ability to overlay logos, masthead graphics, lower third titles and picture-in-picture. AtomX CAST has dedicated controls to make these features easy to use, as well as illuminated buttons for each input with colored LED lighting to show Program and Preview status.

You can switch to multiview to see all four inputs at once, complete with audio level monitoring. The Ninja V/V+ HDMI output can be used as a secondary output that can be set up as a duplicate program out, preview monitoring, or a dedicated multiview output.

Now, even though Atomos is stating that the Ninja CAST bundle is available, b&H is still showing that it isn’t.

AtomX CAST functionality for the Ninja V+ will be available at a later date, stay tuned for more details.