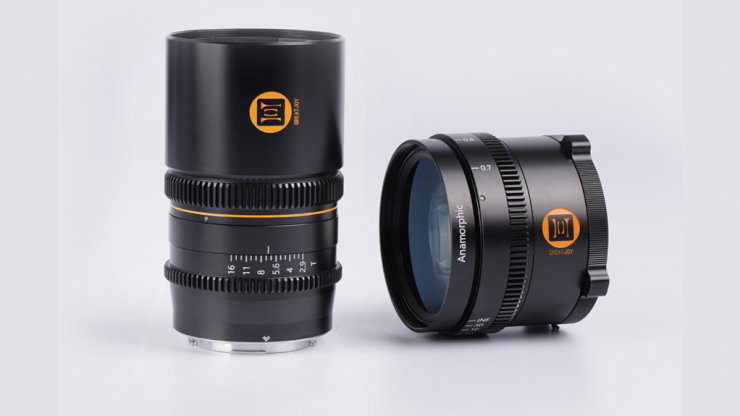 It seems like just about everyone is making anamorphic lenses these days. The latest company, Great Joy, which I have never heard of, has announced a new 60mm T2.9 Full Frame 1.33x Anamorphic Lens and a 1.35x anamorphic adapter.

At first glance, this appears to be a strange concept, however, there is more than meets the eye. This product from Great Joy involves using a 60mm T2.9 Full Frame 1.33x Anamorphic Lens and a 1.35x anamorphic adapter to create a 1.8x anamorphic solution. Yes, you read that right. An anamorphic lens and an anamorphic adapter.

To use the lens and the adapter, you need to set the focus to infinity on the main lens, and then use the focus adjustment on the adapter. Great Joy claims that this combination allows you to focus from 70cm / 2.29′ to infinity. The Great Joy Anamorphic Adapter has a 297° focus rotation.

GREAT JOY states that this is ‘The Most Promising 1.8x Anamorphic Solution Ever.‘

Now, this anamorphic lens and anamorphic adapter solution may sound like a crazy idea, but there is actually some method to the madness. You can use the 60mm T2.9 1.33x by itself to create one type of anamorphic look, or combine it with the 1.35x adapter to create another.

You can also use the anamorphic adapter by itself with a spherical lens or another 1.33x or 1.5x anamorphic lenses for added versatility.

For a budget anamorphic solution, having the ability to use both the lens and/or the adapter makes a lot of sense.

The optical design of the 60mm T2.9 1.33x lens consists of 13 elements in 10 groups. Great Joy doesn’t state how much the lens weighs.

The lens is available in four different mounts:

Great Joy is offering an introductory price of $749 USD for the 60mm T2.9 1.33x Anamorphic Lens if you provide your email address.

The launch day special price for the 1.35x Anamorphic Adapter is $449 USD.

Great Joy doesn’t state when the lens and adapter will actually be launched or when they will ship.