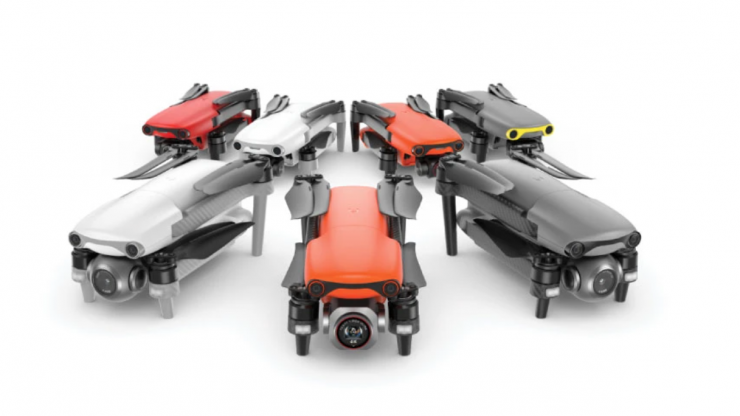 Autel has announced its new lightweight EVO Nano and EVO Light drones. These are foldable compact drones that are aimed as direct competition to some of DJI’s offerings.

The EVO Nano can record 4K/30fps video and 48MP still images. It utilizes a three-axis mechanical gimbal. It has a fixed f/2.8 lens.

EVO Nano+ is capable of capturing 50 MP photos. It uses an RYYB color filter array design with a f/1.9 aperture. Autel claims that it offers superior noise reduction capabilities and the ability to capture quality images in low-light conditions.

You can track fast-moving subjects through the PDAF + CDAF autofocus system.

The drones feature the flock, rocket, fade away, and orbit automatic shooting modes.

Both the Nano and Nano+ use SkyLink, which provides a transmission range of 6.2 miles at 2.7K/30fps.

Both the EVO Lite and EVO Lite+ weigh in at just 249g. The EVO Lite range sits between the sub-250-gram EVO Nano and the EVO II.

The Lite+ is equipped with a 1-inch CMOS image sensor and Autel’s intelligent moonlight algorithm that allow the drone to capture crisp, vibrant details at night with low noise, even when the ISO is cranked up high. An adjustable aperture from f/2.8-f/11 provides the ability to alter exposure and depth of field.

It can capture 6K at up to 30p video and 20MP still images. The Lite+ also has a Defog Mode which Autel claims reduces the haze with a fog penetration function that automatically adjusts the camera’s vibrance settings to make your footage look crisp and clear.

Autel claims that the EVO Lite comes with the world’s first 4-axis gimbal design. Why 4-axis? Well, having a fourth axis means you can shoot vertical video with the drone for easy sharing to social media platforms.

Both EVO Lite and Lite+ drones can shoot HDR video. They also have the usual array of automatic shooting modes, such as flick, rocket, fade away, and orbit. Both drones can also utilize Autel’s Dynamic Track 2.1 which is claimed to be able to track fast-moving subjects with precise autofocus that locks in within milliseconds using a phase detection autofocus and dual focus algorithm.

The Lite and Lite+ both get Autel’s new ultra-wide-angle obstacle avoidance cameras. The sensors give the drones a front field of view of 150 degrees.

The EVO Lite series has the ability to fly for up to 40 minutes.

The EVO Lite and Lite+ use Autel’s SkyLink which offers a transmission range of 7.4 miles and transmission quality of 2.7K/30fps. 2.4/5.8/5.2GHz frequencies are all supported.

The EVO Lite and EVO Lite+ are expected to be available by the end of October 2021.