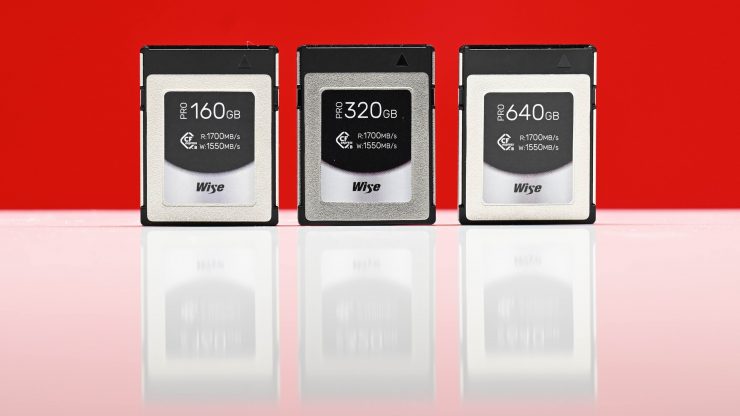 Wise has announced a new PRO line of CFexpress Type B memory cards in capacities of 160GB, 320GB, and 640GB.

So why are they PRO?

According to Wise, the CFexpress Type B PRO memory cards are designed with improved product lifespan and sustained speed in applications that require frequent higher levels of data reading and writing. Through customizing NAND commands and firmware algorithms, Wise has optimized both endurance and performance in line with native SLC
NAND.

With a new software algorithm for heat control and a lower risk of corrupt files, the CFexpress Type B PRO memory cards are claimed to provide superior stability and speed for projects where you can’t afford to compromise on the recording media being used.

The Wise CFexpress Type B PRO memory cards have sustained writes of up to 1400 MB/s and sustained read speeds of up to 1700 MB/s. The max. write speed is 1550 MB/s.

Essentially, it is almost impossible to drop any frames or lose any data because the write speed is way more than is required by the camera. However, we are bound to see cameras coming in the future that will exceed today’s current speeds, so it is always good to use cards and media that can greatly exceed your current requirements.

So how do these speeds compare to some other high-capacity cards on the market?

Given the RED Mini Mag controversy from a few years ago, it is always a good idea to find out exactly what you are paying for, especially when it comes to actual and claimed capacity.

So when I mounted the 640GB CFexpress card it shows the actual capacity as being 640.1GB.

As a comparison, the older Wise CFX-B series 512GB CFexpress card shows the actual capacity as being 480GB. When I previously reviewed this card I reached out to Wise to ask them why a 480GB capacity card is labeled 512GB.

Wise told me “We reserve more space for buffer cleaning purpose which offer more stable writing performance in the beginning when developing the media. At that time, there are no host devices (cameras) coming out yet. Therefore, we think reserve this amount of space should be a safer choice. In the future or next firmware update, we may try to reduce this space and see if they still provide the same performance for current cameras.“

Clearly, they have now been able to maximize the space on their newest card.

I also got someone to check the capacity of the SanDisk 512GB CFexpress card. That card also only has 476GB of capacity (3GB is used for structure).

The speeds offered by the new Wise CFexpress Type B PRO memory cards allow them to record 8K RAW material from the Canon R5 without breaking a sweat.

Above you can see the card requirement speeds listed by Canon for recording 8K on the R5.

I tested the card out with the Canon R5 and set the camera to record 8K RAW.

The card worked without any issues and I was able to record 8K RAW without encountering any problems.

In fact, the card kept recording for 26 minutes and 6 seconds and it only stopped because the card became full.

A heat warning came on after 24 minutes, but the camera continued to record until it ran out of memory.

Above you can see a full list of compatible cameras that the cards will work with.

In cameras such as the Nikon Z6 and Z7 that only feature a single lane PCIe 2.0 interface, the camera can only read and write to CFexpress cards at throttled down speeds that are similar to what you would already get with an XQD card. As these cameras don’t even use the full write speed capabilities of XQD cards, CFexpress won’t offer any increased in-camera performance.

There are currently only a very small number of Thunderbolt 3 CFexpress card readers available. The majority of readers are only USB3.

I did a few tests to see what the sustained read/write speeds of the Wise CFexpress Type B PRO memory cards were and also how fast I could offload material through a USB-C card reader to an ultra-fast SSD.

Above you can see the read/write speeds using Blackmagic Disk Speed Test for the Wise CFexpress card.

Above you can see the read/write speeds when using the AJA System Test.

Considering I was using a Wise CFexpress USB-C card reader that has a maximum read speed of 1000 MB/s these were the results I was expecting to see.

This is what you clearly need to remember with any card. The speed is going to depend on the card reader you using and the type of media you are offloading it to.

Above you can see a speed test done with a 2017 MacBook Pro (test file size: 64GB) using the Wise card and an Atech Flash Technology Blackjet TX-1CXQ CFexpress Type B / XQD Thunderbolt 3 Card Reader. As you can clearly see, the type of card reader you use makes a big difference.

Now, I also wanted to do some other tests to see how long it would take to copy and verify a 524.14GB file from a fast NVMe drive to the Wise card.

The total time to copy and verify the 524.14GB file was 11min and 11sec. So that means the average write speed was around 780MB/s.

The Wise CFexpress Type B PRO memory cards are available for the following prices:

As you can see the Wise CFexpress Type B PRO isn’t the cheapest option available, but it is more affordable than the RED DIGITAL CINEMA PRO 660GB and just slightly more than the ProGrade Digital 650GB CFexpress 2.0 Cobalt.

The card worked flawlessly on the Canon EOS R5 and it can record 8K RAW and 4K HQ without any issues at all.

If you are using CFexpress Type B cards with a Canon C500 Mark II, EOS R3, EOS R5, or RED V-Raptor VV to record high-resolution RAW files, you are going to need quite a few of these cards to get you through a day!