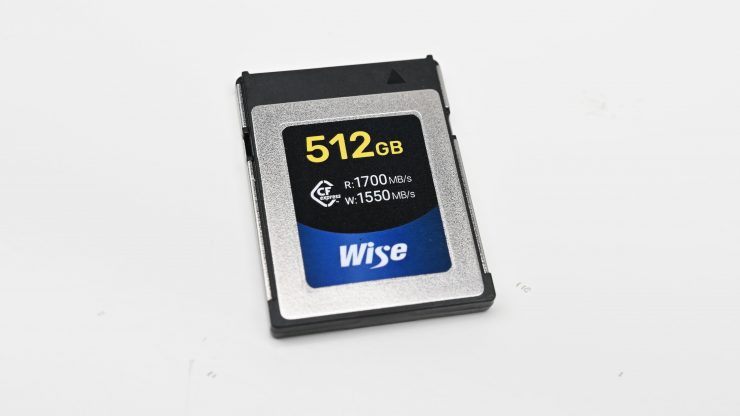 Only a few weeks ago, Wise announced new CFexpress cards in capacities of 128GB, 256GB, and 512GB.

The cards were specifically designed and engineered to work with the Canon EOS C500 Mark II, Nikon Z6 and Z7. I was lucky enough to get my hands on one to review.

The Wise CFexpress cards are backward compatible with the XQD form factor with updated cameras to optimize performance.

CFX-B series CFexpress enables 8K RAW continuous shooting and video recording for future premium DSLR, Mirrorless and video cameras. With the design of PCIe Gen3 interface, the card provides speeds of up to 1700 MB/s read and 1550 MB/s write, which is over 3 times faster than the best CFast 2.0 and XQD cards.

One of the main reasons to choose CFexprees over XQD, aside from speed, is capacity. XQD cards top out at 256GB, while with CFexpress you can have a 512GB card.

So when I mounted the 512GB CFexpress card it only shows the actual capacity as being 480GB. Given the recent RED Mini Mag controversy I reached out to Wise to ask them why a 480GB capacity card is labeled 512GB.

Wise told me “We reserve more space for buffer cleaning purpose which offer more stable writing performance in the beginning when developing the media. At that time, there are no host devices (cameras) coming out yet. Therefore, we think reserve this amount of space should be a safer choice. In the future or next firmware update, we may try to reduce this space and see if they still provide the same performance for current cameras.“

I also got someone to check the capacity of the SanDisk 512Gb CFexpress card. That card also only has 476GB of capacity (3GB are used for structure).

The problem is, I believe that all of the current mirrorless and DSLR XQD capable cameras out there today only have a single lane PCIe 2.0 interface. What does this mean? Essentially only having a single ane PCIe 2.0 interface means the camera can only read and write to CFexpress cards at throttled down speeds that are similar to what you would already get with an XQD card.

The Nikon Z6 and Z7 don’t even use the full write speed capabilities of XQD cards, so CFexpress won’t offer any increased in-camera performance.

Where you are going to notice massive speed improvements is when it comes to offloading your cards. Transfer speeds from your CFexpress card to your computer through a USB-C CFexpress reader will yield much faster results than when using an XQD card.

What you clearly need to remember, and this goes for any type of media, is that transfer speeds will vary depending on both read and write speeds of your card, your card reader, and what type of hard drive you are transferring too.

I did a few tests to see what the sustained read/write speeds of the Wise CFexpress cards were and also how fast I could offload material through a USB-C card reader to an ultra-fast SSD. I also did the same tests with an XQD card.

Above you can see the read/write speeds using Blackmagic Disk Speed Test for the Wise CFexpress card.

Above you can see a Quick Bench speed test for that same card. As you can see the sustained average write speed was 962.14 MB/s and the average read speed was 974.83 MB/s. Considering I was using a Wise CFexpress USB-C card reader that has a maximum read speed of 1000 MB/s these were the results I was expecting to see.

Above you can see a Quick Bench speed test for that same card.

I also tried some real-world tests with the Nikon Z6 where I started recording and then turned the power off. The files were saved and I didn’t lose any footage. With the Z6 if you pull the card out while you are recording it doesn’t save any of the last clip.

They come with a 2-year manufacturer warranty.

How does the price compare to XQD cards?

As a comparison here is what various capacity Sony XQD cards cost compared to Wise CFexpress:

As you can see, the faster CFexpress cards are actually cheaper than Sony’s XQD cards.

Competition comes in the form of the SanDisk Extreme PRO CFexpress Card Type B. They come in capacities of 64GB, 128GB, 256Gb, and 512GB.

Above you can see the price comparison. The Wise cards are quite a bit cheaper, especially when you are looking at 512GB capacity cards.

If you own a Nikon Z6/Z7, or you have just purchased a C500 Mark II, the Wise CFexpress cards are a nice option. With increased capacity and far greater offload speeds (depending on your hard drive), they make a lot more sense than buying an XQD card.

While you won’t get or see any noticeable increase in performance in-camera when using CFexpress in a Z6/Z7, the offload speeds make it a far wiser decision than using an XQD card.

If you are using them with a Canon C500 Mark II and are recording RAW internally, you are going to need quite a few of these cards to get you through a day!

Its aluminum design is not only durable but helps protect against overheating, and a built-in write protect switch helps users avoid accidental data loss.

I tested out the card reader and found that it worked as advertised. Even though it says read speeds of 10Gb/s are possible, the real-world performance you get when offloading a CFexpress card over USB-C is around 1000MB/s.