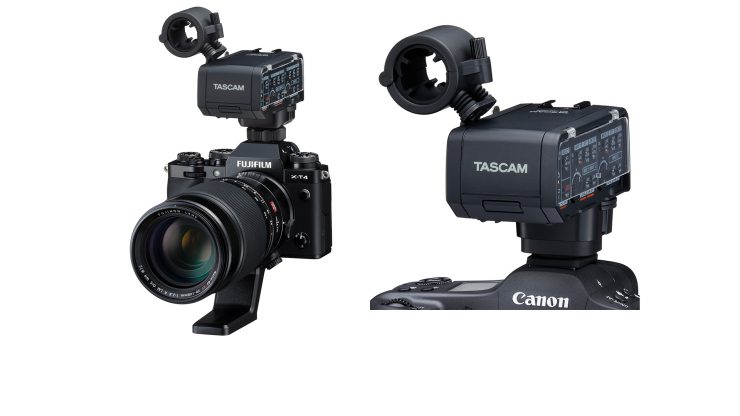 Mirrorless cameras generally don’t have high-quality audio inputs. They are just good enough, and generally, if you want the best audio possible, you need to use an audio recorder and sync in post.

To improve on this, Tascam is collaborating with Canon, FUJIFILM, and Nikon to develop an XLR hot shoe adapter that sends the audio directly into the camera using the hot shoe. Tascam states the high-quality preamps and digital to analog converters of the adapter improve the captured audio quality over using the 3.5mm audio input of the mirrorless camera.

Camera mode: Audio can be transmitted to the microphone input of the camera.
Headphone mode: Direct monitoring with headphones.

The adapter is powered by the camera’s multi-accessory shoe as well as interfacing the audio. This adapter is already being used on Canon’s just announced XF605 digital video camera. On the XF605 It gives you the ability to utilize two XLR inputs, and you can also input two further audio channels by using the 3.5mm stereo input that is on the camera.

The kit also includes a battery box (2 AA batteries) and a cold shoe mount adapter. This makes it an analog output from the CA-XLR2d-C unit and connects with the camera’s 3.5mm input.

I’m assuming it will work with any camera that uses a 3.5mm input. At this time, the unreleased EOS R3 is the only mirrorless camera supported, but I would think more models will be added. It is probably the case that the hot shoe design on the other RF mount models like the R5 and R6 is not compatible, however, you could probably use the Nikon Analog interface kit CA-XLR2d-AN instead.

Like the Canon version, the CA-XLR2d-F sends the audio directly from the hot shoe and uses the 3.5mm option. It also includes a battery box and cold shoe adapter.

Unfortunately, the audio via hot shoe isn’t possible; therefore, a cable to the camera’s audio input is required. You still get the advantages of Tascam preamps and two XLR inputs plus a shotgun mount. The CA-XLR2d-AN adapter has a battery box that houses two AA batteries. The adapter uses a 3.5mm connection to send audio into the camera audio input.

Tascam states you get the advantages of the high-quality preamps, but the input is a 3.5mm cable and not the hot shoe.

Sony has had this ability for several years with the XLR-K3M Dual-Channel Digital XLR Audio Adapter.

I have always wondered why the others didn’t follow suit as it is such a great design and works very well. It even works on the FX cameras for additional channels. Sony also has the SMAD-P3 Multi-Interface Shoe Adapter for their wireless audio receivers.

This product is still in the development stage, but Tascam is aiming to release the CA-XLR2d adapters this year. No pricing has been given at this time. It looks like a very cool product that surprises me some that Sony and Panasonic are the only ones offering this type of interface. It works so well and will be a good addition for better audio capture with mirrorless cameras.