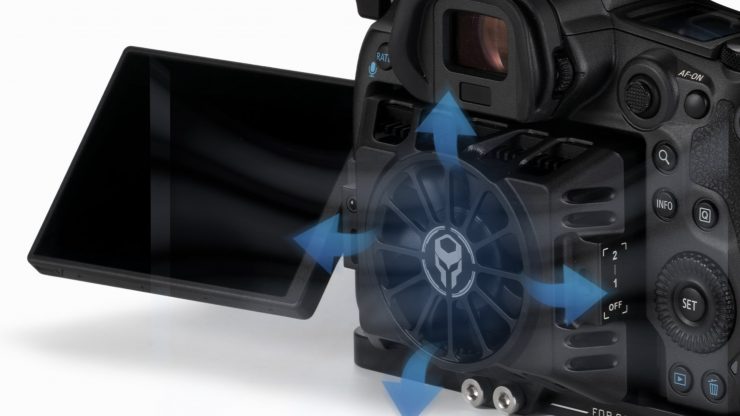 Remember the Tilta Cooling Cage for the EOS R5? It was announced way back in July 2020 and it showed what was essentially a giant fan that was attached to the back of the camera.

At the time, I don’t think anyone thought this was an actual product that would ever be released. Back in July 2020 when it was announced there were numerous reports of overheating issues with both the R5 & R6 surfacing, Tilta then took it upon themselves to come up with a solution.

Well, in somewhat of a surprise you can now actually buy the R5 Cooling Kit.

Above you can see the difference between the production version and the original concept that was shown back in July 2020.

The Tilta Cooling Kit is designed to be used with the company’s Tactical Camera Cage and it sits in the body cavity of the R5 behind where the screen flips out.

It attaches via two screws directly to the bottom of the Tilta Tactical Camera Cage for the R5/R6.

This bracket also features an articulating hinge, which lets you swivel the entire module away from the camera body, allowing you to flip the screen back into a closed position.

If you don’t have a Tilta Tactical Cage you can pair it with the ARCA Baseplate for Cooling System to use it with existing equipment. This actually comes as part of the Tilta R5 Cooling Kit.

The Tilta Cooling Unit utilizes an ultra-thin design that is claimed to provide instant temperature reductions for the EOS R5. The fan itself has 7 blades and it runs at 7000rpm. Tilta claims that the noise level produced is lower than 30db.

The module features two different fan speeds allowing for quieter cooling during takes and stronger cooling when needed. You can also turn the fan off.

It is interesting to see that Tilta has removed the original claims that stated that that the temperature of the camera can be reduced to just 59F (15C) within 1 minute. They also listed that the maximum temperature reduction was 82F (27.8C). On the current product page for the R5 cooling unit, Tilta doesn’t list any details about temperature reduction, nor do they make any claims about how effective it is.

It is powered through USB-C. There are USB-C inputs on either side of the Cooling Unit. The Cooling Unit is also said to use an NTC smart temperature control switch. This allows it to turn on and off depending on the temperature and if there is any build-up of moisture. The system can be powered via any USB-C power source and features an EXT port for run stop cables. This EXT port is for connecting the Nucleus Nano R/S cable to the camera. R/S can be controlled via the R/S handle.

The Tilta R5 Cooling Unit can be purchased for $165 USD.

Straight of the bat, there are going to be a few glaring obvious problems when using the Cooling Unit. The first is that you have to keep the rear screen out and away from the camera body, and if you are going to put the camera up to your eye and use the viewfinder, the fan is probably going to hit your face, as well as be constantly blasting your face with warm air.

You also need to power the Cooling Unit so you will need to attach some sort of USB-C power bank to the cage. Yes, you can flip it out of way, but if you are going to be shooting in conditions where you would need to use this product in the first place, then why would you want to do that?

Does it actually work?

Yes, Canon has released several firmware updates over the last year or so that have helped slightly with reducing overheating issues, but these overheating problems still do exist.

Look, you can’t blame Tilta for making a solution for what appears to be a real-world problem, regardless of how ridiculous this product first appears to be. The fact that a product like this even needs to be made in the first place points to a far greater issue.

Depending on what type of work you do, the overheating issues with the R5 and R6 may be a problem for you, or they may not be. It really is going to depend on a lot of variables.

Is this a product you would actually buy? Do you think it would actually work? Do you own an R5 and are still looking for solutions to the overheating issues? Let us know in the comments section below.