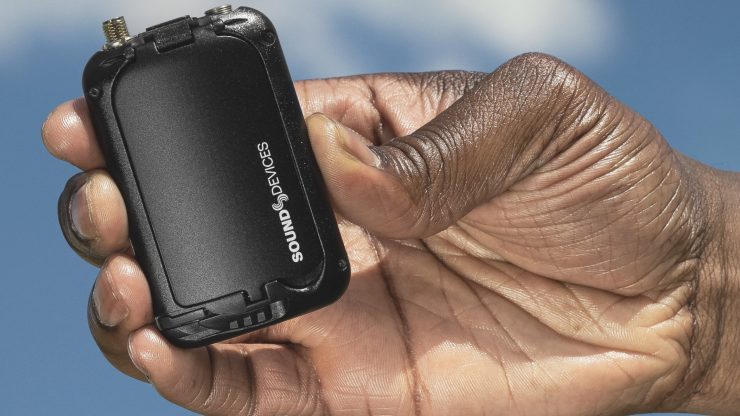 Sound Devices has announced the A20-Mini digital wireless transmitter. This is a small form factor TX unit that can do internal 32-bit float recording and be controlled remotely via an app.

According to Sound Devices, the A20-Mini digital wireless transmitter combines British audio quality with the best of American design. The sleek, rounded form fits perfectly into body contours and underneath tight clothing.

The A20-Mini records in 32-bit float, giving you up to >130 dB of dynamic range. This allows for audio gain decisions to be made after recording, with zero loss in headroom or noise performance.

32-bit float recording has found its way into several products over the last few years and we have seen devices such as the Tentacle Sync Track E feature the ability to internally record 32-bit float. The international version of the Tentacle Sync Track E is also able to record and transmit simultaneously if you hook up a third-party wireless TX to the headphone output.

To my knowledge, the Sound Devices A20-Mini is the first self-contained wireless TX that can record 32-bit float internally and transmit at the same time. Now, there is a catch. If you are in the US you are out of luck because of the Zaxcom patent, the A20-Mini will only be able to transmit and record simultaneously if you are outside of the US. If you are in the US it will still record internally, but it won’t be able to transmit.

The A20-Mini can record up to 80 hours of continuous, uncompressed 48 kHz, 32-bit float recording to its inbuilt 64GB storage. It doesn’t take or use any type of recording media such as an SD card. All the recording is done internally. You offload the recorded WAV files via the USB-C port to a computer.

The A20-Mini features its own ultra-accurate 0.2 ppm internal timecode generator that can be jammed via USB-C with negligible drift over a 24-hour period.

You can also jam the timecode from any 8-Series mixer/recorder.

The A20-Mini transmitters feature an internal 2.4 GHz antenna. They can operate on frequencies from 470 MHz up to 694 MHz, which makes them suitable for use in most parts of the world.

The RF power can be set to the following:

What is the A20-Mini Compatible With?

The A20-Mini works with the Audio Limited A10-RX. This does mean that you have to be invested in the Sound Devices Wireless ecosystem to be able to use the A20-Mini.

The other catch with the A20-Mini is that it has been specially designed to supports lav mics only. For using 48V phantom, balanced mics, or balanced line sources, you need to use the A10-TX.

Unlike the A10-TX which only supported lavs which are 2-wire, the A20-Mini also supports 3-wire lavs such as the Schoeps.

How do you power it?

You can power the A20-Mini using 3 AAA batteries or with a rechargeable Sony NP-BX1. You can also recharge the NP-BX1 via the Mini’s USB-C input.

You can also turn the A20-Mini on/off by utilizing the app.

The A-20 Mini TX units can be controlled via the free A20-Remote App. By utilizing Bluetooth 5.2 you can use your tablet or phone to completely control your A20-Mini.

With the Mini’s GainForward Architecture, users can set the transmitter’s gain, low-cut, and limiter directly from their 8-Series mixer/recorders.

You can also do the same thing directly from the A10-RX wireless receiver.

You can use a non-Sound Devices mixer and still get the benefits of GainForward. Both the 20-Mini and A10-RX can be used with virtually any brand of mixer. You can use the gain control, low-cut, and limiter built into the A10-RX’s menu to control these functions.

The A20-Mini utilizes gasketing and waterproof connectors, so it can withstand water and sweat.

Sound Devices has also introduced the PowerStation-8M, an optional accessory that lets you charge up to 8 A20-Minis at a time. As well as battery charging it also lets you do file transfers and timecode jamming of up to eight A20-Minis at once. It can be powered via DC (TA4) or USB-C (USB-PD).

The Sound Devices A20-Mini isn’t available yet, but you can pre-order it for $2,200 USD. The A20-Mini isn’t being aimed at the lower end of the market, this is a product for the broadcast and film industry.