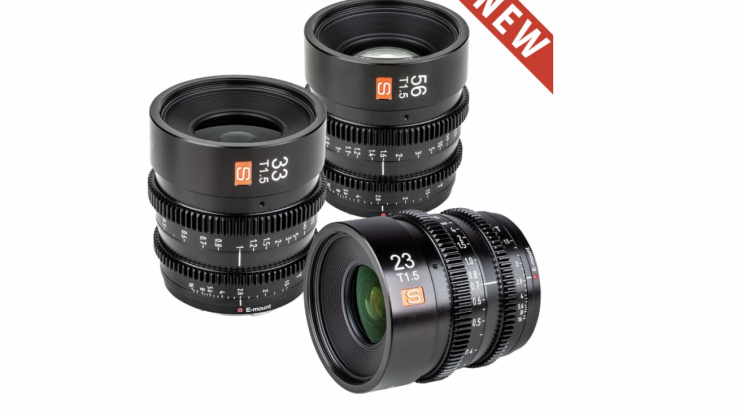 Now, before you get too excited these lenses only cover APS-C sized sensors so they are not likely to appeal to owners of cameras such as the FX3, FX6, FX9, and a7S III. While you could still use them if you put your camera into an APS-C crop mode, that is not why most people buy full-frame cameras in the first place.

Viltrox already makes 23mm F1.4, 33mm F1.4, and 56mm F1.4 autofocus lenses for Sony E-mount APS-C cameras. These new versions are undoubtedly based on these lenses, but the optical construction of the cine versions does differ slightly.

The lenses are all the same size, so their geared iris and focus rings will be in the exact same place no matter which one of the lenses you use. Having identically sized lenses is also handy if you are swapping over lenses on a gimbal.

All three lenses have a 62mm front filter diameter.

Viltrox is claiming that the lenses don’t have any focus breathing, but I have no way of currently independently verifying that.

The optical design consists of 11 elements in 10 groups and they also have 14 aperture blades.

The Viltrox 23mm, 33mm, 56mm T1.5 E-mount Professional Manual Focus Cine Lenses can be bought as a set or individually. Below are the prices:

You can also buy them on various Amazon sites around the world: