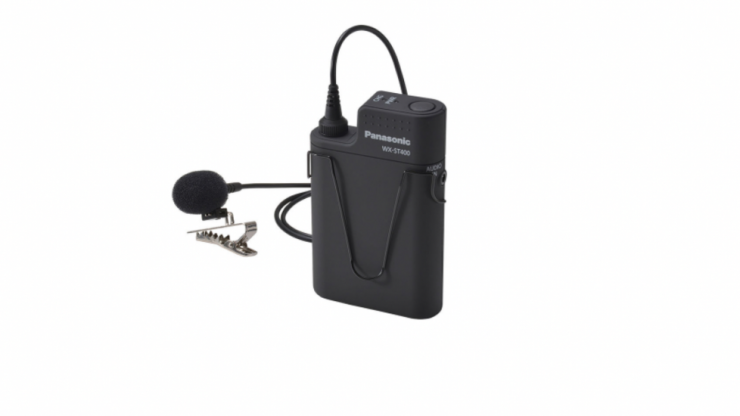 Panasonic has announced the WX-ST400 lavalier microphone + wireless bodypack. This is designed to be used as part of Panasonic’s SR200P 1.9 GHz Digital Wireless Microphone System.

The wireless bodypack will only work with the WX-SE200 Expansion Receiver, which means it is only really suitable for use in corporate, educational, and event-based applications.

According to Panasonic, the condenser microphone has been optimized for vocal clarity and it uses Panasonic’s proprietary filtering to help eliminate noise while still maintaining flat frequency response.

The wireless bodypack is powered by one AA standard or rechargeable battery. There is also a contactless desktop charger (WX-SZ200) that is sold separately.

The bodypack also features a 3.5mm audio input connector, so the end-user can use the same system to transmit audio from a local source such as a laptop.

The WX-ST400 pairs wirelessly with Panasonic’s WX-SR202 receiver and assigns channels automatically, eliminating the need for manual channel assignment. The system can be expandable to suit a variety of spaces, from small classrooms, medium-sized classrooms/conference rooms, to large auditoriums. Up to 8 separate antennas (per receiver) can be mounted to the wall or the ceiling in the room and connected via CAT5 back to the receiver locked away in a cabinet or closet and multiple 2-channel receivers can be installed to add wireless microphone channels to the room.