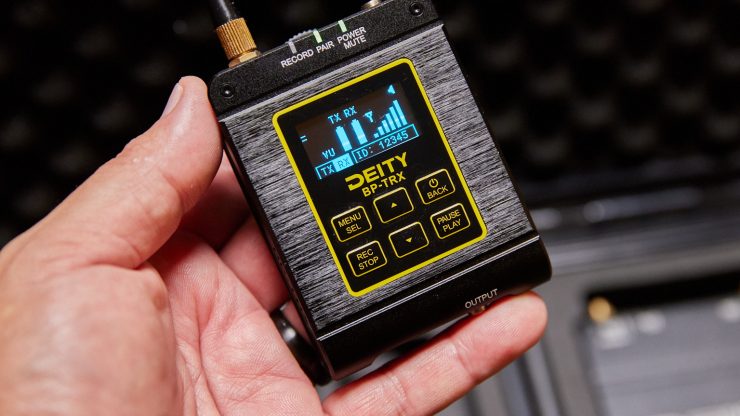 If you wanted to record and transmit at the same time with a wireless system, you would have to look into a Zaxcom product as they own the rights to do this. Today Zaxcom and Deity Microphones have announced the signing of a license agreement for five patents. The agreement gives the new BP-TRX units sold in the US the ability to transmit and record audio at the same time. This is the first time Zaxcom has allowed another company to use its patent.

Check out my first look at the Deity Connect BP-TRX.

The licensing deal covers all BP-TRX units already shipped to the USA, and all new units produced going forward. USA customers will have access to the international firmware updates starting with Firmware V1.1 (released in early June 2021). Customers who have already placed pre-orders and are awaiting the shipment of their BP-TRX units can perform a firmware update on day one of ownership to unlock all the new features.

“We are thrilled to have worked out an agreement with Glenn Sanders and the Zaxcom team. We are excited to showcase to our US customers the full potential the BP-TRX will have on their video shoots. It’s been a long 2-year journey designing the BP-TRX and this license agreement with Zaxcom is the cherry on top of all that hard work.”

Back in 2005, Zaxcom released the TRX900 Transmitter, which was awarded a patent for the ability to transmit and record timecode laced audio. It was a world first and was recognized for a technical achievement award in 2016 by the Academy of Television Arts and Sciences with an Emmy Award and in 2017 by the Motion Picture Academy.
Today, Deity Microphones becomes the first brand ever to have licensed these patents from Zaxcom.

This is excellent news for US customers. The patent has been a hurdle for many years and was frustrating for companies that offered transmit and record functions with international versions but had to have a separate model for the US. While frustrating for the competition, Zaxcom did license their technology to protect the innovations they created.
It will be interesting to see if Zaxcom will make other patent deals with more companies in the future. The ability to record and transmit at the same time is very handy.

This is pretty nerdy, but I listed them below if you are interested in the actual patents.

Important to mention that Zaxcom has sued a lot of companies over the years to protect their innovations. Lectrosonics has spent a lot of time in court with Zaxcom. Remember JuicedLink? They also made a device called “Little Darling’ which was a small portable audio recorder. This device infringed on a Zaxcom patent and was shut down. JuicedLink was a small company that didn’t survive the legal process.

I don’t know why Zaxcom decided to sign an agreement with Deity, but I think it makes a lot of sense as the two companies make very different products and cater to different users. Zaxcom is primarily a UHF system designed for broadcast and film industries, and Deity is a 2.4 GHz system for independent and lower-budget filmmakers. The market for the two types is very different and shouldn’t hurt the sales of Zaxcom’s offerings as the retail price difference is very large. A Zaxcom transmitter alone retails over $1500. If they can make a few bucks on the agreement, everyone wins.

The single BP-TRX retails for $249. Timecode Kit (2pc kit) retails for $479, and Deity Connect Deluxe Kit for $699. I think you get a lot for the money, and versatility is the name of the game for the BP-TRX. Plus, for US customers, you now also have the record and transmit feature just like the rest of the world has had.