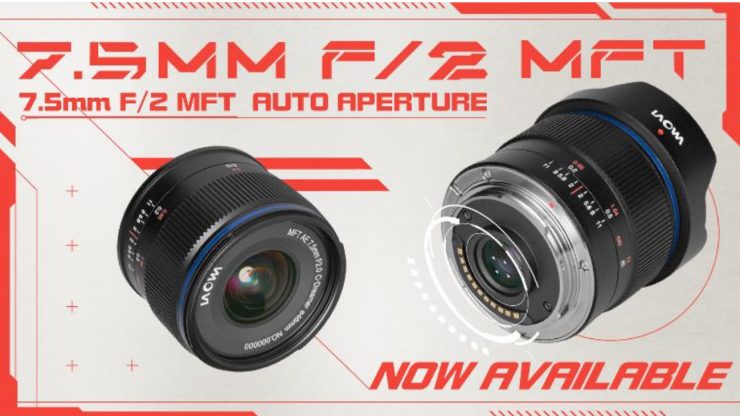 Laowa has announced an automatic aperture version of the 7.5mm f/2 MFT lens. The addition of a control chip provides metadata in EXIF and allows aperture control from the camera.

Following in the footsteps of the Laowa 10mm f/2 Zero-D MFT and 50mm f/2.8 2x Ultra Macro APO, the Laowa 7.5mm f/2 MFT is the third MFT lens assembled with a CPU chip and motor. It allows you to adjust the aperture via the camera body. It doesn’t feature a manual aperture ring.

According to Laowa, the 7.5mm f/2 MFT is the widest prime lens for Micro Four Thirds (MFT) in the market.

It has a 110° ultra-wide angle of view. The optical design of the lens consists of 13 elements in 9 groups. The existing standard version has 7 aperture blades that generate 14-point sunstars. The number of blades of the new automatic aperture version has been changed to 5 so you can capture 10-points sun stars.

The standard version of this lens weighs approx. 6oz (170g) and is 55mm long. The auto aperture version is slightly lighter at approx. 5.29oz (150g). It has a 46mm front filter thread and a close focus ability of 12cm.

The lens is now available to pre-order for $549 USD.