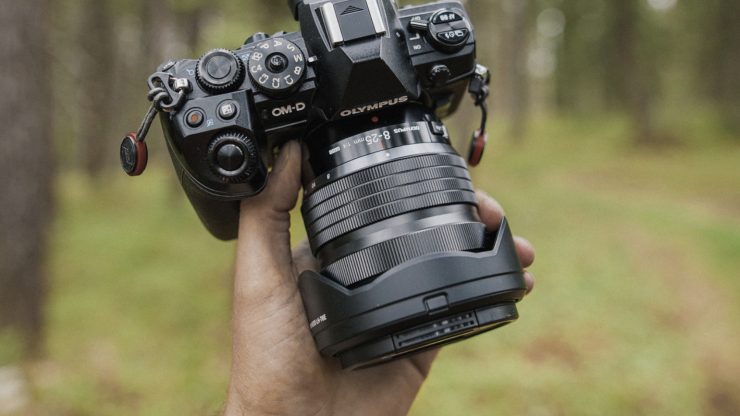 Olympus has announced the M.Zuiko Digital ED 8-25mm F4.0 PRO lens. This new lens is a new weather-sealed, compact, high-magnification zoom lens for Micro Four Thirds cameras such as the Panasonic GH5/GH5s, and the upcoming GH6.

This is the first lens in the M.Zuiko PRO series to feature a retracting mechanism to keep the size of the lens to a minimum. Despite being an ultra-wide-angle, high magnification zoom lens, it weighs less than 15 oz (425g).

The lens is claimed to offer excellent optical performance and the optical construction consists of a 16-elements in 10-groups. According to Olympus, various types of aberrations are thoroughly suppressed, including chromatic aberration. The integration of a large DSA lens significantly reduces sagittal comatic aberration

The optimized ZERO Coating and lens shape help to suppress ghosting and flaring during backlit shooting.

The lens has a maximum shooting magnification of 0.42x and the closest focusing distance is 9″ (22.86cm) across the entire zoom range.

The M.Zuiko Digital 8-25mm F4.0 PRO supports Focus Stacking, which merges images into a single photo in focus from the foreground to background in-camera,

It is important to note that in order for this lens to support Focus Stacking, those who are shooting with the E-M1X or E-M1 Mark III will need the latest firmware (launched on April 6th). Those using the E-M1 Mark II or E-M5 Mark III will need to update their cameras with firmware that will be newly available beginning today. No other Olympus cameras support the focus stacking functionality.

This lens features IPX1-equivalent splashproof, dustproof, and freezeproof performance down to 14°F (-10C). Fluorine coating is used on the front lens and it also features a 72mm front filter thread.

Other f features include a Manual Focus Clutch that lets users switch between auto and manual focus options. A lens function button is available on the side of the lens so users can change settings.