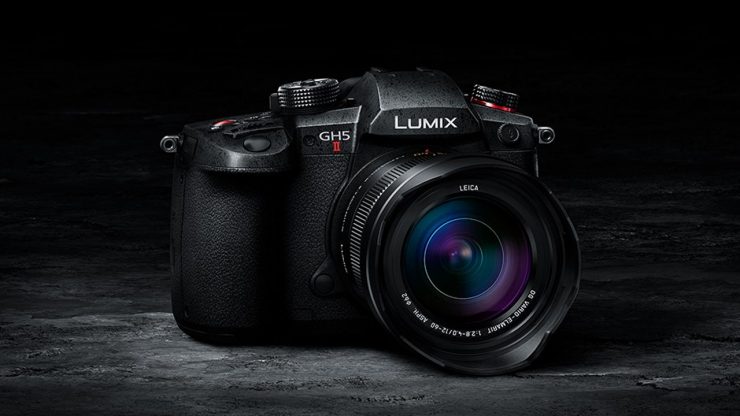 Panasonic has announced the GH5 II. This is the second iteration (or third if you count the GH5s) of the very popular GH5 that was announced way back in September 2016.

This isn’t the highly anticipated GH6, that is an entirely different camera altogether. Instead, this is an entry-level hybrid-mirrorless that has been designed with live streaming in mind.

2021 is the 20th anniversary of LUMIX and Panasonic has plans to release quite a few products this year. 18 cameras have been released under the LUMIX name over the last 20 years.

At first glance you may be thinking, hold on, isn’t this just the old GH5 with a couple of small upgrades. You certainly could make that argument as the GH5 and GH5 II do have a lot in common.

Panasonic wouldn’t confirm that it is using the same sensor and processor as the GH5. They prefer to say that the sensor is similar. In principle, it does look to be the same 20.3 MP sensor, however, it does have a new anti-reflective coating and the Venus Engine processor has had some small tweaks. Panasonic claims that they have been able to squeeze an extra 1/3 of a stop of dynamic range from the GH5 II. Utilizing what is essentially the same sensor and processing engine from a 5-year-old camera is a bit of a head-scratcher.

Image performance will undoubtedly be almost identical to that of the original GH5.

The camera features the same 5-axis image stabilization as the GH5, but according to Panasonic, it now offers up to 6.5 stops, instead of the 5 found in the GH5.

The GH5 II still uses the same contrast-based auto focus system as the GH5, but Panasonic has enhanced it, and it is now capable of head/body/animal recognition, as well as Face and Eye detect.

The body also appears to be very similar to the original GH5. The rear LCD screen is 3″ which is slightly smaller than the original GH5’s 3.2″ screen. It does, however, have a minimal increase in dots. Panasonic also states that it is High Visibility which presumably means that it is now brighter.

The GH5 II still utilizes dual SD card slots. So no change from the original GH5.

There are zero new features when it comes to photography. The max burst rates are exactly the same as the original GH5.

Does the body have any differences to the GH5?

No, not really! As you can see above, the only real noticeable difference is the record button is now fully red.

The GH5 II does get some improvements over the GH5 when it comes to recording capabilities. There is nothing here that will jump of the page and surprise you, but the new abilities are certainly worth mentioning.

Below is what the GH5 II is capable of recording:

In all of these modes, there is no sensor cropping or recording limitations. However, Panasonic does state that if the camera does get too hot it may stop the recording to protect itself.

When shooting in 6K Anamorphic or 4K Anamorphic you can adjust the image stabilization for those particular modes. This is a function that is available in the S5 and S1H. There is also anamorphic de-squeeze available for 1.3x, 1.33x, 1.5x, 1.8x, and 2x.

The GH5 II can record in the following high frame rates:

Something the GH5 II can do that the GH5 couldn’t is the ability to simultaneously record externally and internally at the same time.

Now, this is a little confusing when it comes to what you can record externally and internally so below is a chart that hopefully makes it a little easier to work out.

From the information I have seen, the GH5 II doesn’t have the ability to output a RAW signal. Whether this will be eventually possible at some stage, will be interesting to see.

As I mentioned at the top of the article, apart from the small changes when it comes to internal and external recording, the ability to be able to live stream with the help of the LUMIX Sync app via WiFi is the biggest difference between this camera and the original GH5. This added ability means you don’t have to use a computer to live stream. You can do it directly from your phone or tablet.

You can live stream via the app as I just mentioned using the data connection on your phone or tablet, or you can stream through a private WiFi network.

On the LUMIX Sync app, you select Live Streaming, and then you can choose what platform you want to stream to. You can stream to the following platforms:

So what can you actually stream? Below you can see:

What you clearly need to know is that you can’t internally record while you are streaming. It is only possible to record while streaming with an external recorder.

You can also stream using the LUMIX Network Settings Software. This is handy if you are streaming at a large event where there may be a lot of demand on a 4g/5G network. In this instance, you would copy the streaming settings to an SD card and then insert that card into your camera. You then connect the camera over WiFi directly to the router and configure the streaming settings in the camera menu.

Look, it is certainly a nice addition to the camera but this is hardly anything groundbreaking. There are plenty of ways to live stream wirelessly that don’t cost a lot of money.

In a future firmware update, you will also be able to live stream via USB tethering or do RTP/RTSP Wired IP streaming. This will be coming by the end of the year.

There are also new Frame Markers so you can set a wide array of aspect ratios depending on your needs.

The camera will also recognize if you are shooting vertical video and you can go into the menu and select to display the information overlays to suit vertical orientation.

The GH5 II will also have a luminance spot meter. Again, this is a feature that has been brought over from the S1H and S5.

Panasonic has included their Filtering System that you can use to select and narrow down options for various resolutions, codecs, and frame rates. This is a feature found in most of the latest Panasonic hybrid cameras. It was first introduced with the S1H.

You can also save various recording configurations and place them in the My Menu section for quick recall.

The GH5 II uses the DMW-BLK22 battery which is the same one used in the S5.

If you want to power the camera via USB-PD you still need to have a battery in the camera.

Just like on the Panasonic S5 and G100, the GH5 II features a Sleep mode. So you can have the camera automatically turn on if required when you have it connected up to another accessory. You could use this functionality for applications such as a camera trap when shooting animals.

Panasonic has also implemented a new focus control ring functionality to select M4/3 lenses when you use them on the GH5 II. You can set the focus ring in the camera’s menu to NON-LINEAR or LINEAR. In NON-LINEAR the focus responds according to the rotation of the focus ring. If you change it to NON-LINEAR, you can adjust the amount of focus rotation you want in degrees. This is very handy when shooting video if you want to have an increased focus rotation.

There will be 12 M4/3 lenses that will get this ability via a firmware update in June.

You can connect the GH5 II utilizing LUMIX tether so you can control the camera remotely when shooting video or stills. This does require a hard-wired connection, so you need to connect your camera vis USB-C directly to the computer.

Panasonic has also made an SDK available for camera control over USB-C to developers who want to come up with their own ways of controlling the camera.

So how does it differ from the GH5?

Here are the main key differences:

Well, let’s have a closer look:

Why did Panasonic make this camera?

I am not going to be the only one who says this, but the GH5 II is a strange release, especially given the development announcement of the GH6. Given it has been almost 5 years since the original GH5 was released, I think most of us expected more substantial upgrades. It almost feels like Panasonic had a bunch of older sensors and parts that they needed to clear from their inventory.

With the announcement of the impending GH6, it is hard to see who would actually buy this camera.

Panasonic is hoping this will be an entry-level GH model that will be bought by content creators who want to stream live footage. Look, I get what they are trying to achieve, but there is a myriad of affordable ways to now live stream. Adding the ability to live stream through a connected phone or a tablet is hardly unique.

The original GH5 offered a lot of world-first features and it was the first hybrid that was capable of recording 4:2:2 10-bit internally. The GH5 II, at least in my opinion, feels like it is something that should have been announced 2-3 years ago.

The GH5 II will start shipping in June for the following prices:

This does seem overly expensive in today’s market, especially for a M4/3 camera.

Panasonic’s own S5 is available on B&H for $1,697.99 USD. That is arguably a lot better camera than the GH5 II in a lot of ways. It is going to be a hard sell for Panasonic to convince someone to buy the GH5 II. I personally think this is a camera that should have been priced at under $1,000 USD.

In the UK, Panasonic is running an early bird promotion where you receive a free 25mm f/1.7 lens & battery.

The GH5 II is a bit of a head-scratcher. With the development announcement of the GH6, it is hard to understand just why this camera even needs to exist in the first place. GH5 aficionados are hardly going to run out and buy this camera, they will instead wait and buy the GH6.

The mirrorless hybrid market is very saturated and there are lots of great options out there at affordable prices. Finding buyers who are willing to part with $1,699 USD for an M4/3 camera that is utilizing a lot of old technology is going to be a hard sell for Panasonic.

Yes, the updated recording options and live streaming are welcome additions, but I just don’t see how this camera is going to be successful in today’s market.

At the end of the day, there isn’t any real point in complaining about a camera. If you don’t like it you don’t have to buy it. There are plenty of choices out there, and the more choices there are, the better it is for the consumer.

What do you think about the Panasonic GH5 II? Let us know your thoughts in the comments section below.