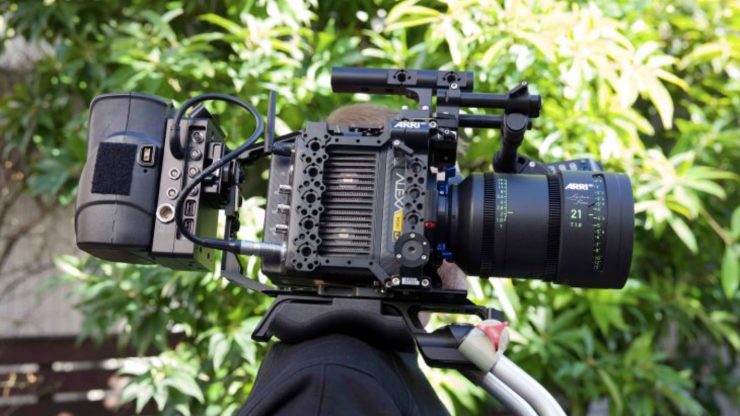 The ALEXA Mini LF was announced just over 2 years ago and a lot of people were surprised that the camera didn’t feature any Super 35 recording formats. ARRI has taken a long time to bring these features out. A Beta version of the SUP 7.0 update has been field-tested over the last few months to make sure there weren’t any issues or bugs.

Above you can see an interview I did with Marc Shipman-Mueller and Frederic Merten about the Mini LF SUP. I also asked Marc about the development of ARRI’s new S35 camera and you can listen to what he had to say towards the end of the interview at 17 min 30 sec.

I was surprised to find out that ARRI never intended on putting any S35 modes in the ALEXA Mini LF. They only started developing these new modes after numerous customer requests.

So let’s dive into all of these new features in more depth.

The same workflow can then be used for Mini LF and Mini, except that Apple ProRes has an .mxf file format on Mini LF and a .mov file format on the Mini. If your requirements are just S35, these new formats also have a lower data rate than the LF formats. Please note that these S35 recording formats, like their equivalents in the ALEXA Mini, are not Netflix 4K approved.

So, let’s have a look at the new S35 recording modes that are available:

This format is great for shooting with most S35 lenses. This is the most flexible format for S35 shows and used by many feature films, drama series and commercials. The maximum frame rate of this Mini LF recording format (60 fps) is twice that of the same recording format on the ALEXA Mini (30 fps).

This is a very popular format for drama series and commercials without a 4K sensor resolution mandate. It is ideal for shooting with spherical S35 lenses for a 16:9 target deliverable. By using fewer photo-sites than S35 Open Gate you can reduce the data rate by 76%. Various post workflows are possible: for instance, if cropping to an HD image, this format provides ample extra resolution for resizing, repositioning, rotating, stabilizing, or tracking in post. Alternatively, up- sampling to UHD in post is easy and delivers great results. The maximum frame rate of this Mini LF recording format (75 fps) is higher than the same recording format on the ALEXA Mini (60 fps).

This format is designed for shooting with an anamorphic S35 lens for a target deliverable of 2.39:1, or for shooting with spherical S35 lenses for a target deliverable of 1.85:1 with extra room above and below the image. This is a popular format for the S35 ALEXA cameras and was chosen to be included in Mini LF SUP 7.0 instead of the S35 6:5 as it provides a lot more flexibility for only a slightly increased data rate. The maximum frame rate of this Mini LF recording format (75 fps) is higher than the same recording format on the ALEXA Mini (50 fps). Please note that the recorded file container (border of black pixels around the image) differs in this format in size from the equivalent ALEXA Mini format.

The new large format (LF) recording formats are designed to combine the advantages of the large format look (by using almost the full width of the large format sensor) with a budget-friendly lower data rate (the image is down- sampled in-camera to UHD or HD). Please note that an LF 2:1 4K Cine format was not included since it is so close to LF Open Gate that you may as well shoot LF Open Gate and crop. An LF 2:1 UHD format was also omitted since it is so close to LF 16:9 that you may as well shoot LF 16:9 and crop. Please note that LF Open Gate UHD is not yet officially approved by Netflix (but in progress), and LF Open Gate HD is not approved.

So, let’s have a look at the new large Format recording modes that are available:

By using almost the entire width of the LF sensor, this format delivers the unique large format aesthetic. At the same time, in-camera down-sampling to UHD reduces the data rate and avoids cropping and resizing in postproduction when your target deliverable is 16:9 UHD.

By using almost the entire width of the LF sensor, this format delivers the unique large format aesthetic. At the same time, in-camera down-sampling to HD drastically reduces the data rate and avoids cropping and resizing in postproduction when your target deliverable is 16:9 HD.

With Software Update Packages prior to ALEXA Mini LF SUP 7.0 Beta, when the Magnification feature was used and less than the recorded area was shown on the EVF or on the SDI image, an orange line was shown at the frame boundaries of the monitoring image, as shown in the graphic below.

This is a useful and popular feature, but the orange line could get distracting when shooting on low light levels. With the ALEXA Mini LF SUP 7.0 Beta, if less than the recorded area is shown on the EVF image, SDI image or flip-out monitor image, the orange line will not be shown any longer. Instead, new icons will be shown in the status area to the left of the image and in the status icon tab in the flip-out monitor status bar below the image.

Another change with SUP 7.0 is that ARRI has decided to expand the recording format naming conventions. You can now distinguish between the different recording formats without confusion.

Recording resolutions that are specifically designed for spherical lenses provide default framelines for the most commonly used target aspect ratios (1.33:1, 1,78:1, 1.85:1, 2.00:1, 2.39:1). Custom framelines can, of course, always be generated with the online Frame Line and Lens Illumination Tool.

The Camera Access Protocol is a list of commands an external device can use to communicate with the camera.

The camera sends a “capability” request to a newly connected LBUS device and then treats the device according to the information received.

When using the command MENU > Info > Export logfiles, the camera now combines the camera logfiles, HW Info File, User Setup File and other diagnostic files into a zip archive (example name: ‘logs_A-MINILF_30120_210114_1119.zip’)and stores the archive in the LOGFILES folder on the USB medium. The HW Info File and User Setup Files can still be exported individually to the USB medium.

A number of changes have been made to the internal communications that further improve system stability and should significantly reduce the occurrence of error messages #4, #5, #14, #93, #138 or #200. If you still encounter any of these errors with a camera running Mini LF SUP 7.0 Beta, you most likely have a hardware issue. In that case, please contact ARRI Service, as they have seen some limited cases where these errors were based on hardware. ARRI Service will be able to diagnose and repair these.