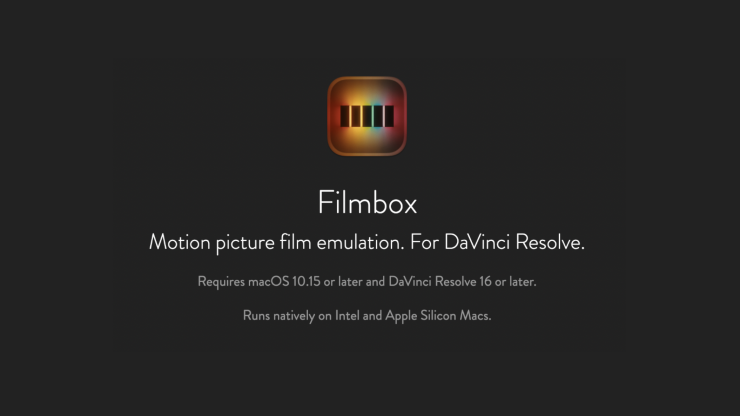 Video Village Filmbox is being touted as a creative utility you can use right inside DaVinci Resolve to create a ‘Holistic reproduction of photochemical motion picture imaging‘.

Video Village states that film has a unique response to light intensity and wavelength, and therefore, Filmbox uses rich empirical datasets to transform scene-referred image data to embody the non-linearities of contact-printed negative. As light strikes color film negative, different wavelengths scatter within the layers of emulsion and affect neighboring image regions in a very specific way. Filmbox claims to convolve digital image data to exhibit the soft yet detailed quality of the negative.

According to Video Village, Filmbox can model the subtle instability of real 35mm and 16mm cameras, and procedurally place samples of real dust.

Filmbox as a Format

According to Video Village, Filmbox is intended to emulate film not just in
appearance but also in working philosophy. A digital cinema camera on its own doesn’t really have an inherent “look”. It stores image data as a record of the light in the scene, not as a blueprint for how a particular display should reproduce that light. Some creative choices must be made about how that photometric data should be transformed and rendered on a display. This processing might involve the camera manufacturer’s video LUT, or it might be defined by any number of complex operations in the color grading process.

The Filmbox interface was designed to be as simple, or as granular as you want it to be. All you have to do is select the source camera and display colorspace.

Full
In the default mode, all modules of the Filmbox pipeline are active and it functions as an end-to-end footage-to-display color pipeline.

Negative Only
Disables the Print module so that the resulting image has only the film negative processing and is analogous to a “Log” film negative scan.

Print Only
Disables everything but the Print module, Useful for multi-node workflows.

Grain & Halation Only
Disables the Filmbox color pipeline allowing the spatial operations
(halation, grain, gate weave) to operate in the source colorspace as part of your own color pipeline.

Here you adjust the camera’s exposure and color balance before emulation
These controls are especially useful when compensating for differences in balance and exposure between cameras. Video Village recommends shooting a grey card and adjusting these parameters to establish a baseline when working with a new camera.

The negative module imparts the photometric and spatial characteristics of the film negative. Working with this module can be as simple as choosing a preset, or as granular as tweaking the components under Advanced Settings.

The “Lab” color controls creatively modify the look of the negative. They are complex transforms that behave differently from traditional color operations and have been designed to achieve creatively pleasing results.

The print module simulates projecting a contact print of the negative in the selected display colorspace. The print module offers a “Tone Curve” parameter and a “Greyscale Neutrality” parameter that modifies the print transform allowing you to hose how “filmic” the tone curve is, and how color-neutral the grey-axis is Full, Standard, and Extended are presets based on those two parameters which can be directly manipulated by selecting Custom.

According to Video Village, grading before Filmbox is like grading before a “Show LUT” except that Filmbox also has spatial characteristics that depend on scene-referred pixel values. Grading before Filmbox is analogous to modifying light values on set before exposing the virtual film negative. If you wish to preserve the authenticity of the emulation it’s important to
perform Scene-referred Photometrically accurate grade operations “up-stream” from Filmbox.

Some grade operations, especially contrast adjustments have the potential to produce inauthentic results from Filmbox’s spatial processing if performed before Filmbox. These types of operations may behave more naturally when performed between the negative and print emulations like
grading a film scan. This is what the Filmbox Lab controls are for – but you can also perform your own operations between the Filmbox Negative and Print by using a multi-node workflow.

Filmbox is not cheap. An Indie Perpetual license is $999 USD. You can also buy yearly or monthly subscriptions.

For larger productions, the cost is significantly more.

There is a free version called Filmbox Lite that is for non-commercial use with limited features, but no time limit or watermark.

Just how different this is to the countless other film emulation software platforms that are out there will be interesting to see. I have downloaded the free version to have a look.

Do you think there are far too many film emulation products out there? Do you use film emulation software for your work? Let us know in the comments section below.