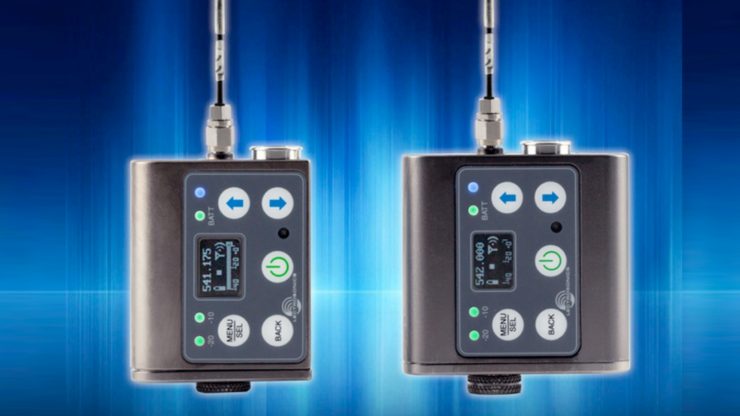 These new wireless transmitters are fully compatible with the DSQD digital receiver, DCHR digital portable receiver, and DCR822 compact dual channel digital receiver. They feature a tuning range covering both the A1 and B1 bands from 470 to 608 MHz (470 to 614 MHz for the E01 international versions).

The new transmitters include specially developed, high-efficiency circuitry for extended operating time on AA batteries. RF power selections are available at 10, 25, and 50 mW. There is also a new, selectable high-density transmission mode (HDM) that allows for much tighter channel spacing, yielding more than double the operating frequencies per available spectrum.

Firmware updates are now available for the DSQD, DCHR, and DCR822 receivers, and updates for the Mac and PC versions of Wireless Designer software, to make use of this new high-density mode.

They both have an audio frequency response of 20 Hz to 20 kHz in standard transmission mode, a dynamic range of 112 dB, and a flat in-band phase response.

The DBSM and DBSMD can be configured as either transmitters or recorders, with files stored on microSD card memory in the industry-standard Broadcast Wave .wav (BWF) format at 24 bits, 48 kHz sample rate. The TA5M mic/line connector also acts as a timecode input for jam sync with master clocks on set. The internal clock provides an accuracy of <1ppm for all-day operation.

The microSD memory card can also be used to update the units’ firmware in the field. The DBSM and DBSMD respond to remote “dweedle tone” commands, available via 3rd party apps such as New Endian’s LectroRM and PDR Remote, allowing users to change settings including frequency, audio level, lock/unlock, and to start or stop recording.

Both transmitters feature durable, machined aluminum housings that are the same size and shape as the previous generation SMWB and SMDWB units so that standard accessories are compatible, including belt clips, battery eliminators, and pouches. The input wiring is also the same as previous generation SM Series transmitters, allowing the use of existing lavaliere and headset microphones wired for either servo-bias or “universal” inputs, along with adapter cables for line inputs and dynamic mics. The two-way IR port ensures quick setup and allows for data sharing between units including frequency tuning groups and encryption keys when in shared key management mode.