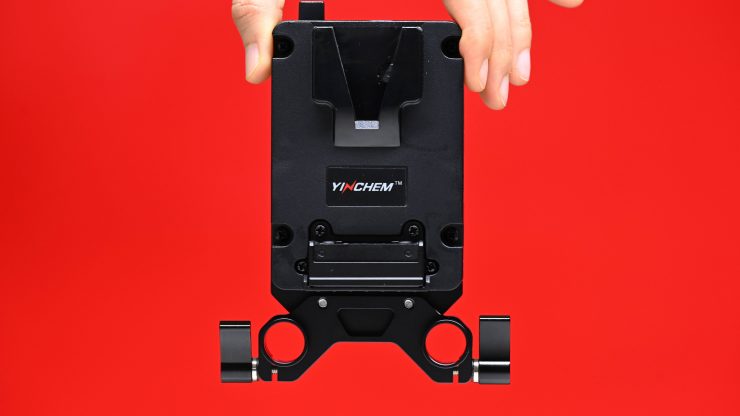 It has been designed to be used with any mini-sized V-mount battery, but you can also use regular-sized V-lock batteries if need be. The whole concept behind the product is so that you can add a battery to power your camera and multiple accessories via the two onboard D-tap ports.

Battery plates for 15mm rods are nothing new, but it is good to see companies now making plates specifically for smaller-sized V-mount batteries.

The build quality is reasonably good. I found that mini V-lock batteries fit snuggly on the plate and there is no movement or wobble. The locking mechanisms that attach the plate to the 15mm rods secure firmly.

YINCHEM has made the D-tap ports large enough that it isn’t a struggle to get the connector in. With quite a lot of accessories, I often come across D-tap ports where you can’t physically even fit some connectors in.

The plate weighs in at 210g (7.4 oz) and above you can see its physical dimensions.

You can detach the 15mm rod bracket from the battery plate if need be. I wish YINCHEM had have used 1/4- 20″ screws for this bracket so that if you removed it you could still attach the actual battery plate to a camera cage.

The battery plate features two D-tap ports that allow you to power other accessories from the battery. It is nice to see two D-tap ports and I like how they have been positioned on either side of the plate.

How do you use it?

It is about as straightforward as it gets. You just place the battery plate onto 15mm rods and you tighten it down.

Above you can see that I have attached it to a Sony F3. You could utilize this battery plate and a larger battery to provide some counterweight behind the camera if you were running a heavier lens.

Conversely, if I just wanted to keep my camera rig small and compact I could just attach it to a single 15mm top rod so that it remains close to the camera and doesn’t increase my footprint significantly. If you are using a small Mini-sized V-lock battery I found that just attaching the battery plate to a single 15mm rod was perfectly fine.

You could of course use it on a variety of different cameras.

The YINCHEM Mini/Pocket V-Mount Battery Plate with 15mm LWS Rod Bracket retails for $50 USD. It should be available soon to purchase.

Below are some of the competing V-lock plates that attach to 15mm rods that would work with mini V-lock batteries.

You could also buy a mini V-lock plate and then just attach a 15mm rod bracket if need be. Several companies offer this option.

The YINCHEM Mini/Pocket V-Mount Battery Plate with 15mm LWS Rod Bracket works as advertised. It is an affordable way of mounting a small-sized mini V-lock battery to a camera so you can power accessories and/or the camera you are using.

Yes, there are a lot of custom solutions for adding V-mount batteries to cameras and we have seen plenty of solutions coming out for cameras such as the Sony FX9 and Canon C500 Mark II/ Canon C300 Mark III. In my opinion, these custom solutions are a way better solution than using a generic, universal batter plate solution. However, if you don’t want to spend a lot of money and you want to be able to swap that battery plate around between different camera packages, a universal solution such as the YINCHEM Mini/Pocket V-Mount Battery Plate with 15mm LWS Rod Bracket makes a lot of sense.