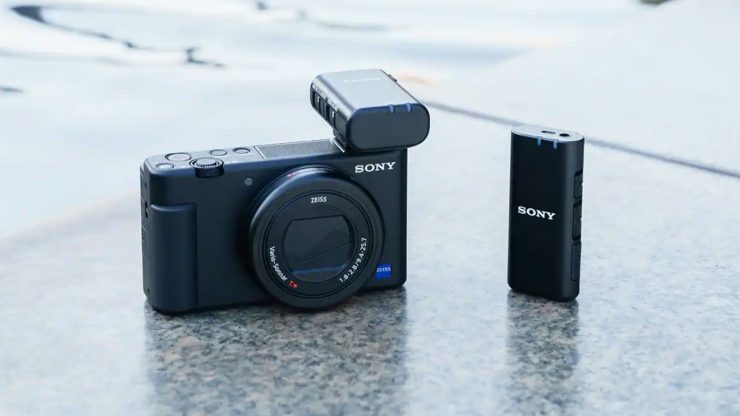 Sony has announced the ECM-W2BT Wireless Microphone and the ECM-LV1 Compact Stereo Lavalier Microphone. These are aimed primarily at Vloggers, YouTubers, and Video Creators.

Nobody actually knows what cameras are compatible with the ECM-W2BT. If you click on the link for compatible cameras you get the image that is shown above. I am not sure how you can release a product and not know what cameras it works with.

According to Sony, the ECM-W2BT has been completely redesigned for high sound quality using an advanced omni-directional mic capsule to capture clear sound recordings from any direction.

Sony also claims that the ECM- offers increased stability of the wireless connection between microphone and receiver, even with obstacles or in crowded environments with high wireless activity. The claimed operating range is up to 200m (656 ft) line of sight.

MIC mode will only pick up audio from the microphone transmitter. RCVR mode only picks up sound from the internal microphone on the receiver, so the user can record audio of themselves. MIX mode picks up both transmitter and receiver audio which is useful when audio from both the subject and the user is desired.

The ECM-W2BT mic supports stereo audio input and an external 3.5mm stereo mini-jack to allow for stereo sound pickup, so it can be used in combination with the stereo-capable lavalier microphone such as the ECM-LV1 compact stereo lavalier microphone. The receiver is equipped with a 3.5mm audio output. The ECM-W2BT can be used with non-Multi-Interface shoe model cameras.

When longer operation is needed, there is a battery assist function via the power supply from the camera’s Multi Interface shoe enables the user to operate the receiver for up to 9 hours

The ECM-W2BT includes a LINK lamp to notify the user of the status of the communication between the microphone and the receiver and a POWER lamp to show you the remaining battery charge.

Above you can see the physical size of the TX and RX units. The microphone unit weighs in at just 27 grams while the receiver is 28 grams.

The ECM-LV1 compact stereo lavalier microphone includes a windscreen and a 360-degree rotatable clip. Power for the microphone is supplied via the mic connector.

The Sony ECM-W2BT Camera-Mount Digital Bluetooth Wireless Microphone System will be available in April 2021 for $229.99 USD. The Sony ECM-LV1 Compact Stereo Lavalier Microphone with 3.5mm Connector will retail for $29.99 USD.