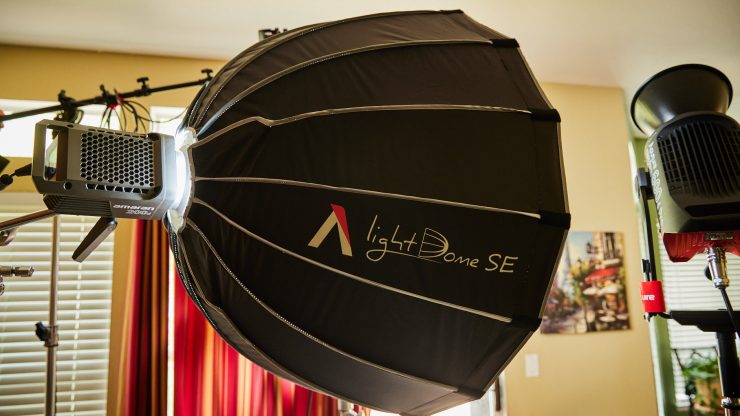 The new smaller 33.5″ Light Dome SE is designed for smaller lights like the new Amaran 100d and 200d COB fixtures, but they will work great with all Bowens Mount COB lights. This gives you an option to go smaller than the deeper Light Dome II. Smaller means that the SE model isn’t as deep while still having a nice big 33.5″ front diameter than 34.8 of the Light Dome II.

The Light Dome SE is 17.72″ deep, while the Light Dome II is 24.0″. Surprisingly, a few inches in depth make it more compact, but does it affect the softness? Yes and no. A larger diffusion will create a softer light source, and having more distance to the diffusion from the fixture also makes a difference. The trick is finding the combination that will work in the location you are shooting in.

The Light Dome SE doesn’t use the same pitching design as the Light Dome II. All of the rods need to be inserted into the Bowens Speedring as opposed to them being preattached.

This makes it a little more time-consuming to assemble; however, the rods are not metal. They are made of much more flexible nylon with a soft rubbery-type cover that is much easier to bend and insert into the Bowens Mount Speedring.

To make it easier to assemble, at the end of four of the rods is a red dot. Simply stick that one in the Bowens Speedring that also has a red dot.

By putting all the red dot rods in first, the Light Dome SE takes shape and pitches quickly. This is a nice upgrade if the rods last.

The outer fabric looks to be the same as its big brother. An inner diffusion attaches with hook and loop tabs that help soften the center to avoid a hotspot. I found it to work very well, but in some cases, when the COB fixture output is low, the inner diffusion might not be needed since it does reduce the output.

The front diffusion comes in two densities. 1.5 & 2.5 stops. I like this a lot as I want my softboxes to be as soft as possible, so I tend to go with the thickest one. The 2.5 does a nice job of softening the COB without a center hot spot. It’s important to have even coverage on the front for the best results as the light will wrap around the subject better.

There is plenty of hook and loop on the inside rim for the front diffusion and the included grid.

Parabolic modifiers are becoming more common these days. The design is used a lot with strobes for stills photographers, and we see the round shape more for hot lights. Does it work better than a traditional softbox design? In a lot of ways, they will look very similar, and the differences are subtle.

Round modifiers will create a round catch light in the subject’s eyes, and many prefer this as it looks more natural since the eyes are round. This is much more noticeable when shooting head and shoulder shots. For medium-framed interviews, it’s not as noticeable.

I find the biggest difference between the two is the setup. A softbox is generally square or a rectangle. It uses only four poles or rods to pitch. A Parabolic modifier uses a lot more. The Light Dome SE uses sixteen. Four rods will be much easier and faster to set up than the Light Dome SE.

Using a large diffuser like the 39″ wide and 24.0″ deep parabolic Light Dome II modifier takes up a lot of room, but the soft sources are very nice. Broad, soft sources are magical. They wrap the face with soft light, so the shadows are soft.
If you can’t set up a 4×4 or 6×6 with a fixture punching light through it, the softbox is the next best solution.

If I can fit it in the scene, I will use it. It is my go-to modifier for the Lightstorm COB fixtures. The Light Dome Mini II is more of a beauty dish and works best for head and shoulder-type shots. I prefer box-type modifiers. I’ve been using Chimera small softboxes for over 20-years. I still use a pair I’ve owned for over ten years, and they are going strong. Great modifiers.

The Aputure 33.5″ Light Dome SE is a winner. It feels like the perfect size for most locations. A larger version will be softer, but if it doesn’t always fit in smaller spaces. I like that it’s still has a large front diameter and a shallower depth. A few inches makes a big difference if space is an issue.

Having two diffusion options and an included grid is great. The easier, more flexible rods solve the problem of setting it up, and the advantage of not having the Light Dome II speedring attached allows the modifier to be packed flat, so it takes up less room for traveling. For my purposes, I would choose the Light Dome SE over the Light Dome Mini for interviews as it’s softer and broader. The beauty dish design of the Light Dome Mini has its purpose, but you can’t beat the softness of a deeper modifier.

Maybe the second best feature is the price. Aputure is all about making lighting gear attainable for the masses, and the new Light Dome SE is no different; with a retail price of $99.00 US, you are getting a modifier, 2 front fabrics, and a 45-degree grid that punches way above its weight.

The Light Dome SE is available now for $99. from all your favorite retailers.