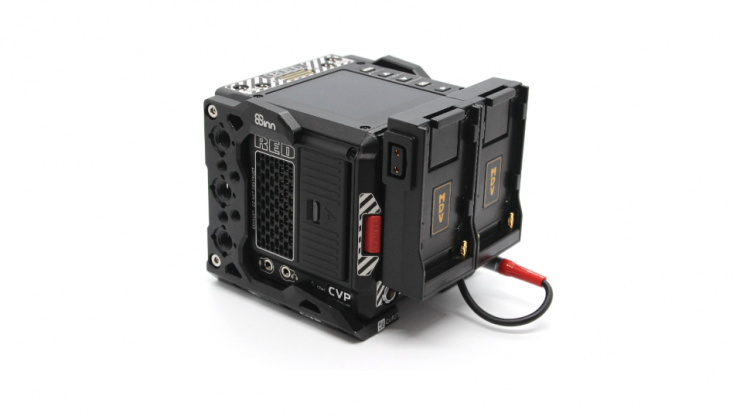 The Hawk-Woods RED Komodo Dual NPF Camera Mount (DV-KOM) fits directly onto the RED Komodo battery that is on the rear of the camera. The DV-KOM requires two NPF batteries to be fitted to enable power out.

You can use 2x DV-F990 batteries which will give you 148Wh, this enables you to have a larger capacity than most mini v-lock batteries. The 990 batteries are the 6-cell NPF battery, you could also use Hawk-Woods DV-F790 batteries, which are the smaller 4-cell NPF but still provide a combined total of 100Wh, which would be similar to a Mini 98Wh V-Lok battery.

The power consumption of the Komodo is around 45Wh so by utilizing two DV-F990 batteries you can expect around 3 hours of run time. With two DV-F790 batteries, you would get around 2 hours.

The adaptor features 2x Power-con outputs for powering further accessories. The battery plate uses a fly lead that goes into the camera via the DC input.

There is no current indication about pricing or availability.

As of now, the Dual NPF Camera Mount has not been approved for use by RED after testing.