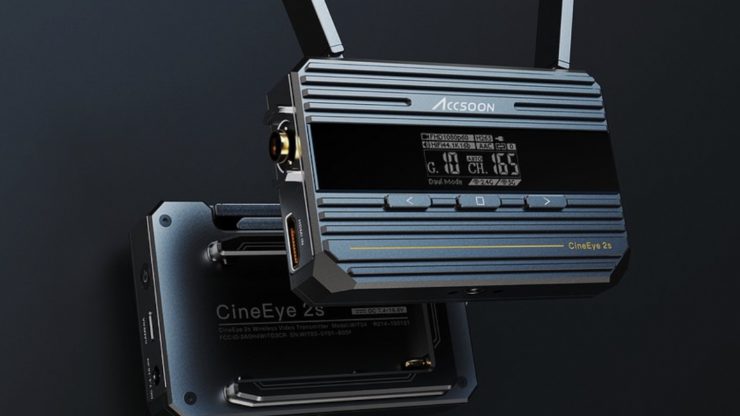 You may recall that recently on the site I reviewed the CineEye 2, which was the follow up to the original CineEye that was first shown at NAB 2019.

After I reviewed the CineEye 2 I gave Accsoon feedback and told them that they should make an SDI version and that is exactly what they have done.

Essentially, the CineEye 2S is exactly the same as the CineEye 2, except it features both SDI and HDMI inputs.

What the CineEye 2 and CineEye 2S allow you to do is to monitor your camera feeds wirelessly on multiple iOS and Android devices. You can view a camera signal remotely on up to 4 iOS or Android devices at a range of up to 150m. This makes it a great, low-cost alternative to more expensive wireless video systems and it allows directors, producers, clients, or anyone else who has access to an iOS or Android device to view footage from the camera.

Apart from just viewing the camera feed, the CineEye 2S can even stream to audiences or remote clients using Youtube and other content delivery networks via RTMP.

The CineEye 2S can accept and transmit a 1080P video signal at up to 60fps from just about any camera that has either an HDMI or SDI output. Accsoon claims that the average latency is less than 60ms.

When you first turn on the CineEye 2S it uses automatic frequency selection to select the cleanest channel from up to 20 available channels. By choosing the frequency with the least resistance it should be less prone to signal interference.

The CineEye 2S uses the free Accsoon Go app for iOS and Android so you can turn your tablet or smartphone into a monitor. The app has monitoring features such as pinch to zoom, user-selectable LUTs, peaking, false color, waveform, histogram, and blue only display. The interface allows users to switch between setup menus and a totally clean view of the image.

You can also load up your own custom LUTs or CD. If you prefer, there are also multiple presets for popular camera Log types that can also be selected. Users can display masks so that different aspect ratios can be previewed. There is also support for anamorphic lenses with 1.25x, 1.33x, 1.5x, 1.78x and 2x de-squeeze options.

The CineEye 2S has a claimed battery life of up to 14 hours when using a single NP-F970 battery. Alternatively, it can be powered via a DC barrel connector with a wide ranging input of 7.4-16.8V. If the two options are used in combination the battery can even be hot-swapped without having to power down the unit.