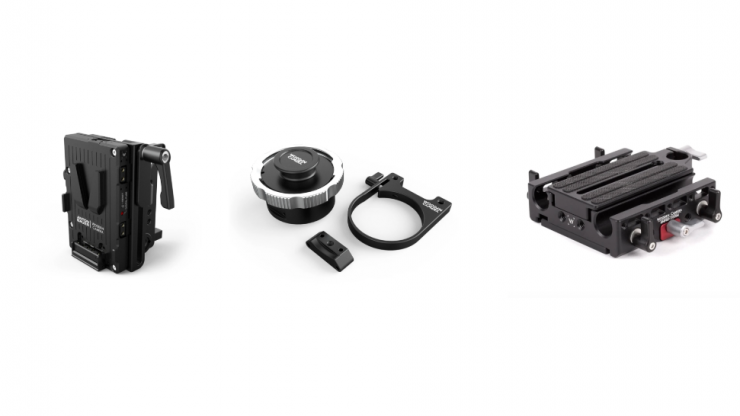 Wooden Camera has announced a new range of accessories for the Sony FX6. These include a Top Plate, Unified Baseplate, V-mount/AB Gold Mount Battery solution, E-Mount to PL Mount, and a range of accessory kits.

The Unified Baseplate features 15mm rod supports and can be attached to standard tripod plates or ARRI standard bridgeplates. The system features a double quick-release that allows the user to either remove the full camera/rod setup from their tripod or simply detach the camera on its own.

Power accessories for the FX6 include the Battery Slide Pro which comes in either AB Gold Mount or V-mount. This battery solution can be attached directly to the back of the camera without the need for rods. The position of the plates can be adjusted by loosening the thumbscrew slide mount. Additional power features include 3x D-Tap ports with a digital fuse that cuts off accessory power when usage exceeds specified amp rating, while maintaining the camera power.

The Battery Slide Pro allows the user to retain access to the battery compartment which means you can also install a Sony BPU battery. This gives the user the ability to hot-swap between the block and internal batteries.

The E-Mount to PL Mount Pro is a shimmable adapter that lets you mount PL lenses onto the FX6. The mount includes a support ring that integrates directly with the Top Plate. Shims are provided for adjusting necessary flange depths, should the camera be out of calibration.

Bundled Accessory Kits are offered in Base, Advanced, and Pro versions.
All Sony FX6 accessories are now available for Pre-Order and will ship in early February. Below are the prices and various kits: