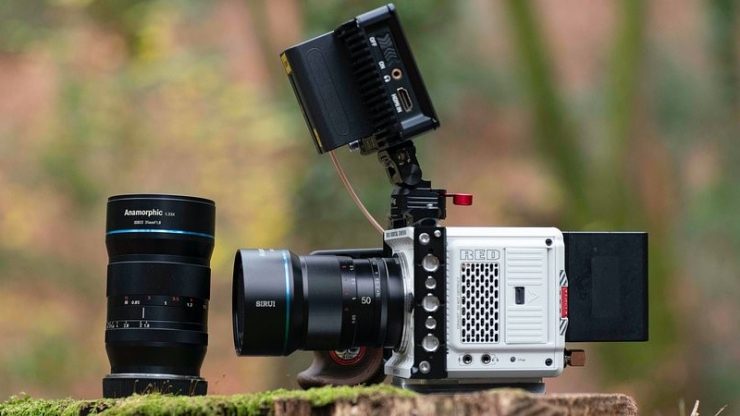 MTF Services has released new RF-mount-converted versions of the popular Sirui 1.33x anamorphic lenses. The conversion allows for the lenses to be used natively on the RED KOMODO and Canon C70.

The lenses are converted from the Micro 4/3 versions of the Sirui 50mm f1.8 and 35mm f1.8. Each lens retains its compact dimensions, allowing for easy handheld or gimbal operation. The conversion needs to be performed by MTF Services and requires precise mechanical modification of the lens to allow fitting of the new mount. The lenses are available pre-converted via authorised MTF Services dealers.

The lenses have a 1.33x wider horizontal field-of-view, versus the vertical one. When the pictures are de-squeezed in post-production they turn from standard 16:9 or 17:9 ratio images into cinemascope letterbox ones. The result emulates the look often seen on big motion pictures, with horizontal blue streak highlights and bokeh with elongated defocused areas.

The RED Komodo sensor is fully covered by the image circle of both the Sirui 35mm and 50mm lenses converted by MTF Services.

For the full-frame Canon EOS R5, the lens image is larger than the image circle so vignetting will appear. A slight crop in post-production is needed, resulting in an approximate 1.35x crop.

Both lenses are available to order immediately from authorised MTF Services dealers or MTF Services.