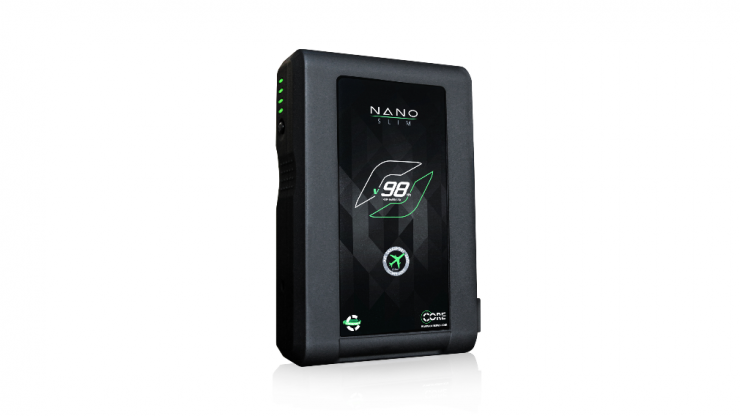 The Nano Slim 98 originally made its debut in 2017 and Core SWX produced it for several years before deciding to cease production to focus on the new NEO and Helix series. However, due to a lot of requests from customers, Core SWX has decided to bring the Nano Slim 98 back.

If you are not familiar with the Nano Slim 98, it is a 98wh Lithium-Ion battery that is capable of handling an 8A load. The battery is only 1.49″ (3.78cm) wide and it weighs in at 1.41lb (639g). The slim profile makes it a good match for use on directors monitors or smaller sized digital cinema cameras.

The battery also features a P-tap/D-tap and a USB output to power additional accessories. The Nano Slim 98 will communicate battery data to camera LCDs/EVFs and digital chargers, including cycle count and date of manufacturing.

The 98wh capacity allows for the packs to be transported carry-on without restrictions under IATA, ICAO and UN regulations. The packs have been UN tested and certified, passing UN38.3 certification.

Along with the purchase of a Nano Slim 98, customers will get access to ‘The Core Advantage Program’. The program lets a battery owner upgrade to Core’s NEO or Helix battery line by receiving a 25% voucher towards the future purchase without the requirement of trade-in. The customer can exercise this right 60 days after the purchase of a Nano Slim 98 pack by filling out the simple “Core Advantage” form found under the support section of Core’s website.

The Nano Slim 98 will be available in V-mount and 3-stud mount types for $239 USD and a two battery pack and a charger will retail for $499 USD. The packs are exclusively offered in the United States by B&H Photo. Any customers outside of the USA can contact their local preferred resellers.