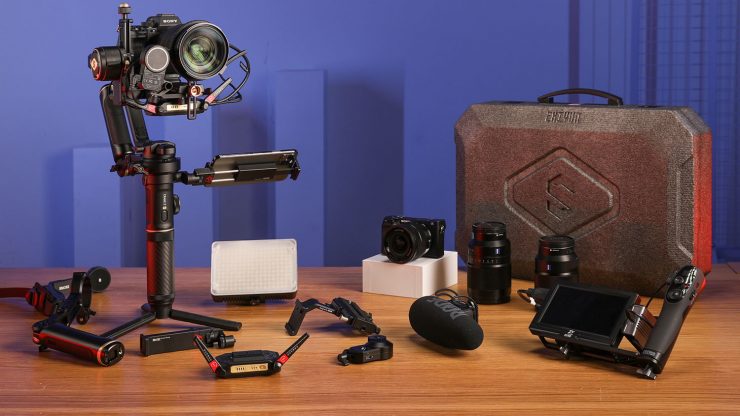 This is undoubtedly in direct response to DJI’s recent launch of the Ronin S2 and Ronin SC 2 and the subsequent announcement of a ton of accessories from both DJI and Tilta.

I reviewed the Zhiyun Crane 2S a few months ago. You can read that review here.

So what do you get?

Along with the actual gimbal itself, the CRANE 2S Pro package also includes the following:

So let’s look at what you get in a little more detail.

The 2nd generation TransMount Image Transmission System 2.0 is claimed to be a substantial upgrade in both stability and efficiency in signal output. It allows for monitoring on multiple devices.

Zhiyun’s DualCam Filming Solution allows you to mount an action camera or other small-sized camera so you can record two shots simultaneously.

The CRANE 2S Sling Grip gives you a second point to hold on and it also makes transitioning from high to low shots a lot easier. It also features plenty of thread holes providing easy opportunities to expand your system.

The TransMount Phone Holder (with Crown Gear) allows you to mount your smartphone onto the gimbal itself for monitoring and control.

All packages are available at the Zhiyun official online store from November 6, 2020