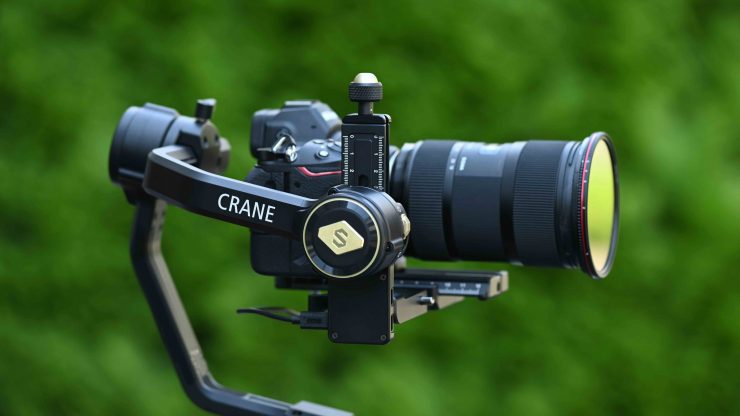 Zhiyun has just unveiled its newest gimbal, the CRANE 2S. The CRANE 2S is the follow up to the CRANE 2, which was arguably one of the company’s most successful products.

I got a chance to have a look at a pre-production version before it was announced.

The CRANE 2S isn’t what I would call a bells and whistles gimbals, it is more of an ode to the more traditional one-handed gimbals of the past.

Earlier this year Zhiyun released the Crane 3S which was designed to fill a gap in the market between one-handed gimbals and larger gimbals such as a Ronin 2 or Movi Pro. The Crane 2S is designed to accommodate cameras such as the BMPCC 6K, Panasonic S1H, and EOS 1DX Mark II. It would also be suitable for cameras such as the new Canon EOS R5 & R6, as well as the Sony a7S III.

This was an early production version I was testing so it didn’t come on a case, but you will get a case once it starts shipping.

Along with the CRANE 2S, you get the usual accessory cables, 3 batteries and a charger, lens support, a riser, a Manfrotto compatible plate, and a mini tripod stand.

The design of the CRANE 2S is modeled around the classic design of CRANE 2, but with a few changes and improvements. I’m still a little puzzled as to why Zhiyun chose to go back to this old-style design considering the direction they decided to go with there recent releases.

There is a new 0.96-inch OLED screen and a brand new axis lock system. Once locked, the axis will stay absolutely still so your camera won’t move around. These locks are very similar to the ones you will find on some of Zhiyun’s recent gimbal releases.

The CRANE 2S not only comes with a quick-release mount but also a safety knob on the tilt axis. The whole idea behind this new quick release plate is that you can reposition it to shoot vertical video.

With a lot of content being created for social media, having the ability to use the gimbal for vertical shooting is a nice touch.

Balancing your camera to shoot vertical videos is a little more difficult, but it is a nice option to have. The only trouble is that most cameras can’t display vertical images when you are shooting video. In principle, the idea of shooting vertical video is a nice concept, but the reality of actually doing it using a lot of cameras is a completely different story.

The design of the Crane 2S does mean that the rear screen on your camera could end up being blocked unless you have it articulated and away from the camera body.

The gimbal also features a built-in focus control wheel. You can use this to control a compatible lens if you connect up a control cable between the gimbal and your camera. You can also use it to control Zhiyun’s optional follow focus motor.

By using a control cable you can also adjust items such as ISO and aperture through controls on the handle.

The CRANE 2S is reasonably well made, although I did find that moving some of the axis was a little difficult. They seemed quite stiff and this made making adjustments time-consuming. A lot of it may have to do with the fact that it is a new gimbal that probably needs to be worn in a little first.

Zhiyun’s TransMount Image transmitter can directly slide into the bottom of quick release base plate without the need for screws.

On the bottom of the carbon fiber handle, there is a thread for attaching the included mini stand.

The CRANE 2S uses three removable 18650 Li-ion batteries, and Zhiyun claims that they will provide up to 12-hours of standard runtime.

You can also extend the runtime through the use of backup batteries.

The Crane 2S works in a similar way to most other Zhiyun gimbals. I didn’t find the performance to be any better or any worse than any of their other recent gimbal offerings.

It works as advertised, but I must admit I prefer the design and usability of Zhiyun’s recent releases, more than that of the Crane 2S.

The previously announced Zhiyun TransMount Image Transmission Module is compatible with CRANE 3S. With the transmitter, video can be streamed to up to three monitoring devices including smartphones. The ViaTouch 2.0 system in the ZY Play app bridges the communication gap between stabilizer, camera and monitoring devices, and allows you to adjust camera and gimbal parameters remotely and more intuitively.

The ViaTouch 2.0 system also enables a visualized remote motion control for the gimbal.

The CRANE 2S will retail for the following prices:

How does this compare to the Zhiyun gimbals that are already available?

While there is nothing wrong with the CRANE 2S there is nothing overly special about it either. Look, it performs as advertised, but I am personally a little puzzled as to why Zhiyun would bring out yet another gimbal model. They seem to abandon models very quickly and not support them with firmware updates. For example, the Crane 3 LAB was only announced in early 2019 and it has already been discontinued. It has almost got to the stage where if you buy a gimbal, you need to do so with the knowledge and expectation that it isn’t going to last you more than a year or two.

I’m just not quite sure where the CRANE 2S sits in the overall scheme of things. Is it equivalent to a Weebill S, or a replacement for the discontinued CRANE 3 Lab?

I would personally prefer to see Zhiyun refine and improve on existing models instead of bringing out a constant stream of new gimbals.