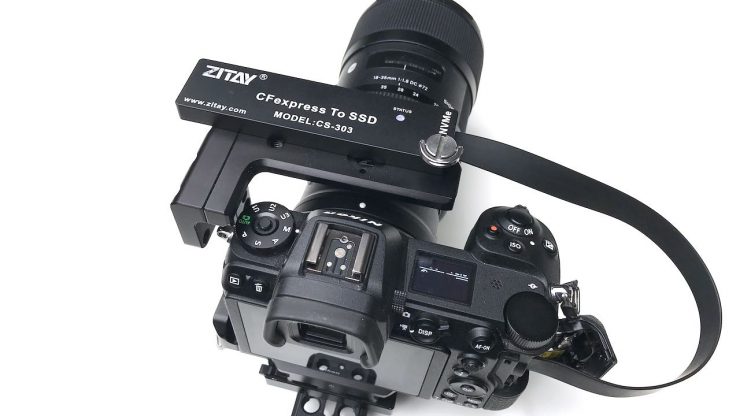 The ZITAY CFexpress to SSD Converter Adapter as its name implies, allows you to record to an external SSD module instead of the CFexpress card.

The company claims it is the first of its type in the world. Now, you need to know clearly upfront that the ZITAY CFexpress to SSD Converter Adapter is just an adapter, it doesn’t come with an NVMe SSD drive. You have to source that yourself.

This is not a new idea

Over the years we have seen quite a few companies make dummy card to SSD adapters. 5 years ago on the site, we ran an article on C-Box, which was a dummy CFast 2.0 card to SSD adapter. C-Box featured a dual-SSD bay that interfaces directly with your CFast camera by attaching into the CFast ports. It did not require any modification to your camera, however, it only worked with a camera that had dual CFast slots.

Essentially it is just a dummy CFexpress card that is using a customized 20cm long HF wire that is attached to a basic NVMe enclosure. Why is the cable 20cm long? It is 20cm long because on most hybrid mirrorless cameras the media card slot is located on the right-hand side where most people hold the camera. Because of this, you need to be able to attach the NVMe enclosure away from this area.

It also comes with a card cover plug. Why do you need one of those? Well. some cameras won’t let you record if the card door is open.

According to the company, the enclosure is made out of aviation grade 6061 aluminum alloy.

The build quality looks to be ok and there is nothing I came across that concerns me.

So why would you want to do this?

That is a good question. CFexpress cards are already fast and come in fairly large capacities, so why would you want to go to the trouble of recording to an external SSD? In one word, cost. 512GB CFexpress card costs range from around $530-$599 USD. A Delkin Devices 2TB CFexpress POWER Memory Card will set you back $999.99 USD.

However, you need to factor in that the ZITAY CFexpress to SSD Converter Adapter costs $158.00 USD, and then you have to pay for the NVMe SSD drive.

As you can see the difference is reasonably minimal if you compare the price of the ZITAY adapter and a 256GB NVMe drive against 256GB CFexpress cards, however, once you start looking at larger capacities the ZITAY option is almost half the cost.

Another reason you may want to use the adapter is that in theory, you will be creating less heat because the CFexpress card is not getting written to it is simply acting as a data pass-through. The SSD enclosure can dissipate heat faster than if you were using a CFexpress card with the card slot door closed. Whether this actually makes any real-world difference with a camera like the Canon EOS R5, who knows. I haven’t used or touched one of those cameras so I can’t comment on it.

What NVMe SSD drives are recommended?

Zitay recommends the Samsung 970 series of drives. I assume that is because they have tested the drives with the adapter, but I can’t confirm that. I also can’t confirm whether or not other drives will work or not.

What speeds can you get?

Well, that depends on the NVMe SSD drive that you are using, but the enclosure will support write speeds of up to 1200MB/s and read speeds of up to 1700MB/s. Those speeds are fairly similar to what CFexpress cards will offer you.

What cameras will it work with?

Zitay sates that it will work with the following cameras:

Once you have the adapter and you put in a compatible NVMe SSD drive you simply plug the CFexpress card adapter into a camera that takes CFexpress cards.

The trouble with any adapter like this is you need to have your card door open and that not only means that it gets in the way, but also that the media slots are now exposed to the elements.

You can’t really use this without having your camera in some sort of cage, because you need to secure the SSD enclosure via its built-in 1/4 20″ screw to something otherwise it will just dangle about in the air.

You also can’t handhold the camera very well (this depends on the camera) when the card door is open.

Now, the only way you know if the drive is recording is when you see the blue status light flashing. You can record to and playback material from the SSD just like if you were recording straight to a CFexpress card.

Does it actually do what it says it does?

In short, yes. It records in exactly the same way as if you were using a regular CFexpress card. I didn’t encounter any problems with the recordings I did. I even simulated a power failure by turning the camera off during the middle of a recording and the file was still there. It was corrupted and I didn’t lose any part of the recording.

Now, it isn’t all good news. I tried putting the ZITAY into two different brands of CFexpress card readers and it wouldn’t recognize the drive. It only worked with the ZITAY CFexpress card reader. You need to be very aware of this issue as you may buy the ZITAY adapter and then be left scratching your head as to why you can’t access your recorded material.

As I have already mentioned the ZITAY CFexpress to SSD Converter Adapter retails for $158 USD and you can find it on Amazon. Remember, this is just an adapter so you also need to buy an NVMe SSD.

Look, the ZITAY CFexpress to SSD Converter Adapter works as advertised and it does make for a more cost-effective solution than using CFexpress cards, however, it does come at the cost of having to use a camera cage.

Without a camera cage (this obviously doesn’t apply to the Canon C500 Mark II) you can’t really use this adapter for certain applications. In saying that, even with a camera cage, it makes handhold shooting difficult with the door open.

Depending on what you are doing it may very well suit your needs perfectly. If you are mainly doing work in a studio or the camera is almost always on a tripod then it will work well. If you are a run and gun shooter or you do a lot of handheld shooting then it probably isn’t the best solution, especially in inclement weather conditions.

Again, it is no faster than using a CFexpress card, so you are only really going to go down this path if you don’t want to pay CFexpress card prices.

The ZITAY CFexpress to SSD Converter Adapter is a pretty niche product but it will suit some people’s needs.