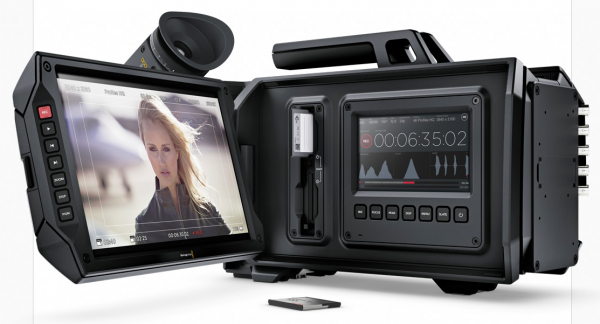 CFast 2.0 is rapidly becoming the new media standard for today’s 4K cameras. Cameras that already use CFast include the Blackmagic URSA and Arri AMIRA, with the URSA Mini and Canon C300 Mark II joining soon. Not only is CFast very reliable and compact, but it can also sustain write speeds of around 450MB/s and data-transfer speeds of over 500MB/s. Like most new technology, the cost of CFast 2.0 cards is currently high compared to SD or CF cards. A Sandisk Extreme Pro 128GB Cfast 2.0 card current retails for around $499.99 US, while a Sandisk 128GB Extreme Pro UHS-I SDXC U3 Memory Card is only $99.00 US.

For my professional use the price of CFast 2.0 is in line with other media I use. SxS Pro+ cards can retail for over $1000 US. I mainly shoot compressed formats so a single card can last many minutes. For users shooting RAW on cameras like the Blackmagic URSA things can be very different and much more costly. Recording 4K RAW on a URSA will only give you 7 minutes of record time using a 128 GB CFast 2.0 card. CFast 2.0 cards are currently only available up to 128GB with the exception of a 256GB card made by Lexar that retails for $699.95 US.

Event shooters require long continuous record times and again may require a lot of CFast cards, which can quickly eat into the budget. For these users there is now an alternative:

A Kickstarter campaign by a company called C-Box System has an interesting solution. Called C-Box it features a dual-SSD bay which interfaces directly with your CFast camera by attaching into the CFast ports. It does not require any modification to your camera but will only work if your using a camera that has dual CFast slots. Also be aware that you will have to have the media bay door open to use the C-Box system.

The C-Box is not an external recorder, instead it is a way to record your camera’s highest quality footage directly to SSDs. External recorders require the camera to which they are connected to send a video signal which then must be encoded by the recorder. Most professional-grade external recorders will only handle up to 4K resolution footage and with a limited number of frame rate options. With the C-Box system you can record all of the frame rate and resolution options that your camera offers natively for internal cards, directly to external SSDs.

One of the main benefits of using the C-Box is that you can record up to four times longer when using 1TB solid state drives in place of 256GB CFast cards. A Samsung 1TB 840 Evo-Series SATA III Internal SSD retails for $449.00 US.

The C-Box can be powered from of any Anton Bauer or V-Lock plate via a standard 5V output. You can even use mobile phone battery packs via USB to power it. The C-Box system comes equipped with a standard 2.1mm x 5.5mm DC female power port.

The C-Box looks to be an interesting option for certain shooting situations where the camera is in a fixed position, such as at an event or in a studio. I would be very hesitant to use it in a run-and-gun situation out in the field. Not only do you have to keep the media door on your camera open, but you have to mount the C-Box somewhere on your camera. From the initial design that I can see, the actual SSDs are only half protected by the C-Box and would be very exposed to the elements. The C-Box may well save you money in the long run but you will have to initially factor in the cost of buying the system, two SSD drives, and a powering solution.

The C-Box system will retail for $499.95 US + shipping and according to Kickstarter will be shipping in August this year if they meet their funding goal.

Product Statement:
There are some incredible cameras coming out with great technical specifications and at competitive prices, but many of them require very expensive CFast memory cards. Depending on the size and length of your project or video, using readily available solid state drives and the rig friendly C-Box, you could save thousands of dollars in cost of media alone!

Key Benefits and Features:
Truly Uncompressed Footage! This is not an external recorder, it is a way to record your camera’s highest quality footage directly to SSDs. External recorders require the camera to which they are connected to send a video signal which then must be encoded by the recorder. Most professional-grade external recorders will only handle up to 4k resolution footage and with a limited number of frame rate options. With the C-Box system you can record all of the frame rate and resolution options that your camera offers for internal cards, directly to external SSDs.
No Camera Modifications Necessary! The C-Box does not require any internal modification of any kind to your video camera. It’s truly “plug and play.
Easily Attaches to Modern Rig Setups! With a standard quarter-inch screw thread, you can hook your C-Box to any tripod, lightstand, ball-mount, or magic-arm with that size thread.
Use Any SSD You Want! Sustained write speeds for solid state drives varies from manufacturer to manufacturer, and we’ll happily suggest our favorites; but you are welcome to use any SSD you want on the C-Box system. We do not require anyone to buy proprietary drives from us.
Have Confidence in Your Data Rates! As of this Kickstarter’s launch, the fastest CFast card we could find boasts a maximum sustained write speed of 440MB/s, compared to over 500MB/s boasted by numerous solid state drive manufacturer’s highest-performing products.
Draw Powered From Your Anton Bauer, V-Lock, or Wall-Mount Power Supply! The C-Box system comes equipped with a standard 2.1mm x 5.5mm DC female power port. Use this with any 5V 2A power supply and you’re ready to go. We recommend using at least 2 amps of power in order to ensure proper powering of device and all connected drives.

Dual-SSD Bay! Plug in two of your favorite SSDs to take advantage of the advanced data-management options on CFast cameras which feature two CFast ports.
Your Camera Can’t Tell the Difference! This means you can manage the C-Box system directly through your camera’s normal memory management interface. No need to handle multiple interfaces before shooting takes.

Save Thousands! We encourage you to go and look at the price of current CFast cards and compare them to the cost of current top-of-the-line solid state drives. At the time of writing, we calculate a savings of $4000 or more when using the C-Box system and two 1TB solid state drives compared to the cost of equivalent storage space in high-performance CFast cards.
Longer Record Times! Record up to 4 times longer before needing to swap media with the use of 1TB solid state drives in place of 256GB CFast cards.
First Wave C-Box Systems Arrive in August 2015! For those of us who have already pre-ordered select CFast cameras, this means a ready-to-shoot rig arriving all around the same time.
“Have You Tested That Thing?”

Of course! I’m bringing to you a product that I will be using, and I wouldn’t bring anything on set I’ve not thoroughly stress-tested. When you receive yours I recommend you do the same so you can know the full potential of what this thing is capable of; I’m sure you’ll be impressed!