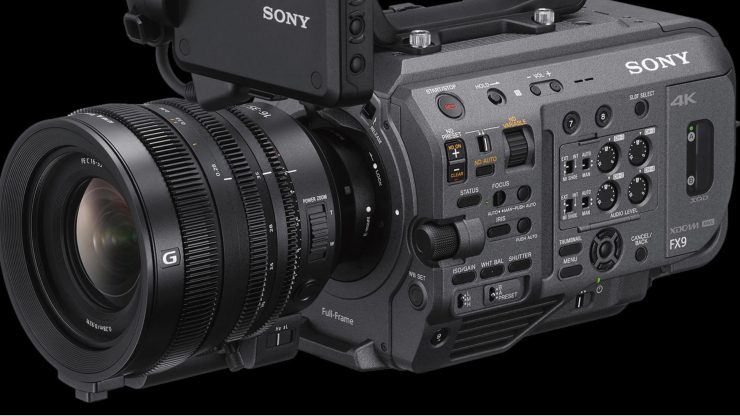 Firmware Version 2.0 expands the camera’s shooting and recording capabilities, more on this later.

If you are an FX9 owner, the firmware can be found at this link: https://pro.sony/ue_US/support-resources/pxw-fx9/software

Sony has added a FF crop 5K option. This can be found in Rec Format >Imager Scan Mode in the Project menu.

Now, there is a catch. The 4K DCI is only full-frame when you are shooting frame rates at 30p and below. If you want to shoot 4K DCI 50 or 60p the camera does so using a 5K scan mode.

A 24p option has also been added to Rec Format >Frequency in the Project menu.

A CUBE file (*.cube) for a 17-point or 33-point 3D LUT created using RAW Viewer or DaVinci Resolve can now be loaded. This was a feature that FX9 users have been crying out for, and one that really should have been available at launch.

A RAW video signal can be output from the RAW OUT connector of an XDCA-FX9 (optional) when it is attached to the FX9.

Unfortunately, this is a very expensive way to capture RAW and it also makes the footprint of the camera a lot larger. It would have been nice to have been able to record ProRes RAW directly to an Atomos device without needing to buy the $2,498.00 USD XDCA-FX9.

When HDR is selected, the color space is expanded to ITU-R BT.2020 equivalent.

The configurable range for ISO and Gain when Base Setting >Shooting Mode in the Project menu is set to SDR or HDR has been expanded.

Eye detect is now supported along with face detection. When the Focus Area is set to Flexible Spot or Zone, the focus area frame can now be moved using touch operation.

In Cine EI mode, face/eye detection AF performance has been improved when shooting in S-Log3.

With Version 2.0 is that you can now do touch screen focus control. Previously you had to move a box around using the small joystick.

Now you can just touch on the screen to focus. This is very similar to how touch focus works on some of the latest Canon cameras.

Some settings can now be changed directly from the status screen. Items can be selected using the multi-function dial, multi selector, or by touch operation.

Any item that is orange can be changed simply by touching on the screen. This allows you to make quick changes to key parameters that you change on a regular basis.

Items that can be changed on the Main Status window include:

Unfortunately, it doesn’t appear that you can change the white balance, ISO/Gain, ND, shutter, or Iris using the touch screen while you are on the Main Status menu.

On the Camera Status window, you can change:

On the Audio Status screen, you can adjust:

On the Output Status screen you can adjust:

It is good to see Sony do this because let’s be honest, no one likes dealing with endless Sony menus to make changes.

For outputting UHD, you were previously limited to only 50/60p as only 12G-SDI was supported.

Sony claims that the image quality has been improved for when Rec Format >Imager Scan Mode in the Project menu is set to S35 2K.

150fps and 180fps options have now also been added for the frame rate when Rec Format >Imager Scan Mode in the Project menu is set to FF 2K.

This means you can put in something like Sony’s DWR-S03D 2-Channel Digital Slot-In Wireless Receiver and effectively run four channels of audio by also utilizing the two onboard XLR inputs as well as two radio mics.

A smartphone can now be connected via a USB cable to an XDCA-FX9 (optional) that allows the FX9 to connect to the internet using a smartphone.

Passwords used for basic authentication now must be 8 characters or longer and contain at least one alphabetic character and one numeric character, respectively.