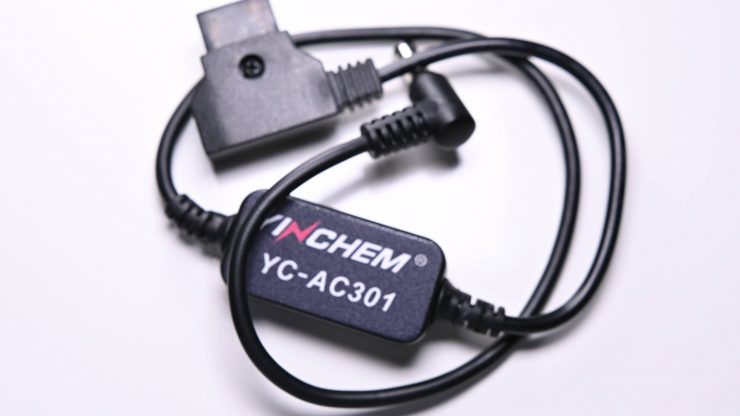 The Yinchem Safe D-Tap is a power cable that was designed to eliminate any errors when connecting a D-tap to a power source.

Now, I can hear the cries already, nobody plugs in a D-tap the wrong way! Well, unfortunately, it is possible to put in a P-tap or a D-tap cable backwards. If you do put it in backward it can instantly fry the product you are trying to power. Reverse polarity insertions are among the leading causes of P-Tap’ed equipment failure.

Now, I grant you, it is fairly difficult to put a D-tap in incorrectly in the first place, but I have done it before.

I’ve owned a few gimbals in the past where I accidentally put a battery in around the wrong way and then it started smoking and fried the product. If a product is designed and manufactured well this should never happen.

The Yinchem Safe D-Tap uses an intelligent cell inside a small black box that is located between the D-tap connector and the other end of the cable. Inside this box is circuit protection that allows the D-tap to continue working even if you have plugged it in the wrong way.

The circuit protection device in the Safe D-tap will automatically rectify the polarity problem regardless of how you are using the D-tap connector. This is very much a set and forget product. You don’t have to do anything or keep an eye on any type of illuminated LED light.

The Safe D-Tap uses gold-plated connector pins that are claimed to provide a wider contact area and lower internal resistance. According to Yinchem, the metal pins are integrated during injection molding to reinforce the D-tap connector for better durability.

The cables look to be reasonably well made and the D-Tap to ARRI 8 pin connector that I tried was nice and robust.

You may remember that I reviewed a similar product called the Lentequip SafeTap Connector on the site last year.

While the Yinchem Safe D-Tap and the Lentequip SafeTap Connector essentially do the same thing, there are a few differences.

The Lentequip SafeTap Connector incorporates equipment protection with patented technology into a D-tap connector. What this does is to provide built-in intelligence monitors that look for reverse polarity, over/under voltage, and short circuits, as well as preventing battery deep discharge. The SafeTap detects if you have plugged a D-tap (P-tap) connector in around the wrong way and it will instantaneously stop the output to the device it is connected to. The SafeTap provides user feedback via a multicolored LED.

On the Lentequip SafeTap the protection circuit is built into the D-tap connector itself. As I have already mentioned, with the Yinchem Safe D-tap the circuit protection is built into a small box that is in between the D-tap and the other end of the cable. When the Lentequip SafeTap detects something is wrong it simply shuts the power coming through the D-tap off, while the Yinchem Safe D-tap will continue to work even if the cable is plugged in the wrong way.

The Yinchem Safe D-Tap is straight forward and easy to use. In some ways, it is nice because the actual D-tap connector remains the same so it won’t stick out of the side of your equipment, but on the other, you do have this box that is between your connectors.

The cables work as advertised and that is about as much as you can ask. I tried purposely plugging a D-Tap connector around the wrong way and the Yinchem Safe D-Tap powered the accessory I had connected up with no issues.

No one likes paying for insurance and we all complain about it until the time comes when we need it. It is best to think of the Yinchem Safe D-Tap as just that, insurance. Am I going to need it, probably not, but when the time comes I would rather have it than not have it.

Having a safeguard on your equipment, especially if you are travelling to certain countries or remote places where you can’t always find replacement equipment adds that extra layer of assurance that you won’t have any issues with your gear.

I would hate to be somewhere where I was working on a shoot and in a hurry, I accidentally plugged in a cable incorrectly and fried a crucial piece of equipment.

The Yinchem Safe D-Tap to DC costs $35.90 USD. There are three different versions that are available:

It’s a small price to pay to prevent you from accidentally destroying or damaging a piece of equipment that costs thousands of dollars.

The Yinchem Safe D-Tap works as advertised and it will provide you insurance to protect your equipment against short circuits.

We really shouldn’t need a product like this in 2020, but unfortunately not every product has built-in circuit protection. Nobody wants to pay for something they don’t think they will need, and if you are confident you will never have a problem with short-circuiting equipment that uses a D-tap then you probably won’t need this product.

If you travel a lot or use a wide array of different equipment that uses D-tap power then it is an insurance policy that may well save you butt when you least expect it.