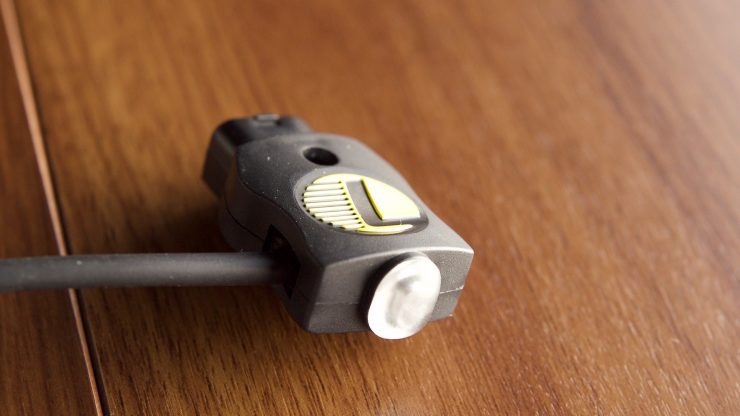 The Lentequip Safetap Connector is one of those products that really shouldn’t need to exist, but I’m glad it does. The Safetap Connector reinvents the P-tap (or sometimes called D-tap), a power connector that a lot of shooters use.

What makes it different from a regular P-tap?

What Lentequip have done is to incorporate equipment protection with patented technology into a P-tap connector. What this does is to provide built-in intelligence monitors that look for reverse polarity, over/under voltage, and short circuits, as well as preventing battery deep discharge.

Now, this isn’t a new product, it has actually been around since 2015, but I doubt many shooters even knew of its existence.

The SafeTap Connector is a little larger than a regular D-tap or P-tap connector.

This is something you need to keep in mind, as the larger size does mean that the SafeTap Connector will stick out further on your equipment.

Why do you need equipment protection inside a P-tap?

Unfortunately, it is possible to put in a P-tap or a D-tap cable backward. If you do put it in backward it can instantly fry the product you are trying to power. Reverse polarity insertions are among the leading causes of P-Tap’ed equipment failure.

The other unfortunate side to this problem is that a lot of manufacturers don’t put any protection circuitry to make their products reverse-polarity proof. This really is crazy considering it costs just a few dollars to do.

I’ve seen this on quite a few gimbals where I accidentally put a battery in around the wrong way and then it started smoking and fried the product. If a product is designed and manufactured well this should never happen.

Now, I grant you, it is fairly difficult to put it in incorrectly in the first place, but I have done it before. Above you can see a product that I could quite easily put the P-tap connector in around the wrong way.

I’ve fried a few components in the past where I was rushing to get something done and accidentally plugged a P-tap cable in around the wrong way. Instantly the product I was trying to power stopped working. This can be a very costly mistake and you wouldn’t want to do it with a high-end wireless video transmission system, or any other expensive equipment for that matter.

With some D-tap or P-tap receptors, it is almost impossible to put the connector in incorrectly. I have, however, seen plenty of D-tap and P-tap receptors that haven’t been designed well where it is difficult to put the cable in, and this can lead to mistakes being made.

How does the Safetap Connector work?

The SafeTap detects if you have plugged a P-tap connector in around the wrong way and it will instantaneously stop the output to the device it is connected to.

The SafeTap provides user feedback via its multicolored LED. 8 amps continuous may be drawn from the connector but may have to be slightly de-rated based on ambient temperature, lead length and cross-section cable used. A sleep mode is activated at 10V, indicated by a blue light, to guard your battery against deep discharge. This feature prevents your costly power source from draining into the damaging extreme low voltage zone should you inadvertently leave a powered accessory unattended.

While you don’t need to remember what all the colors represent, a simple rule is Green is good, RED is bad.

It’s insurance for your equipment

No one likes paying for insurance and we all complain about it until the time comes when we need it. I like to think of the SafeTap as just that, insurance. Am I going to need it, probably not, but when the time comes I would rather have it than not have it.

Having a SafeTap connector on your equipment, especially if you are traveling to certain countries or remote places you can’t always find replacement equipment adds that extra layer of assurance that you won’t have any issues with your gear.

I would hate to be somewhere where I was working on a shoot and in a hurry, I accidentally plugged in a cable incorrectly and fried a crucial piece of equipment. At least with the SafeTap I know I have an “idiot proof” solution in place to stop that from happening.

Products with the RED APPROVED badge are built by third-party manufacturers but have been tested by RED’s Engineering team to ensure they are compatible with RED cameras.

Just like a piece of Ikea furniture you have to assemble the SafeTap and connect it to whatever cable you want to use.

If you prefer, you can buy pre-assembled SafeTap cables for various pieces of equipment (the list keeps growing). You can see what Safetap power cables are available below:

While there isn’t a massive number of pre-made cables available I can see why Lentequip have done this. It’s fairly difficult to stock and manufacture so many different types of power connectors, and then everyone wants them to be different lengths.

The SafeTap connectors are not that hard to assemble and connect up yourself, but like me, you may find its one of those jobs you just keep putting off.

When I did finally get around to doing it, it took me about 15 minutes to do it properly. It’s also worth mentioning that you will need to solder the wire connections to the SafeTap connector.

Lentequip provides detailed instructions about how to connect the SafeTap which you can download below.

Knock-out sections on the left and right side of the housing allow for easy cable exit. Cable strain relief is accomplished via a simple yet effective tie wrap which resists considerable pull-out forces thanks to friction and is built into the lower shell housing.

Is it worth the cost?

A single Lentequip Safetap Connector costs $69.95 USD and a 5-pack is available for $299.75 USD. While $70 may sound like a lot of money for a single connector, it is a small price to pay to prevent you from accidentally destroying or damaging a piece of equipment that costs thousands of dollars.

The nice thing about the SafeTap connectors is if you replace equipment or get rid of it, you can always just take the connector off and put it onto a new cable. In this regard the connectors are more of a long term investment.

This high-efficiency power supply enables you to fast charge all your devices in quickly. You can connect to any input voltage ranging from 8-18 volts (8-35 volts for 3 pin XLR version) and it will output a highly regulated 5V with a maximum iOS current of 2 Amps.

The input of the charger is SafeTap protected and fused while the output is not only short circuit protected, but also incorporates a safety clamping circuit to ensure that your devices remain safe. A green LED indicates that the output voltage is present.

The flexible cable connected to the SafeTap is 20 cm long. The USB charger is also available with a 3 pin Fischer connector for use on Arri R/S accessory outputs as well as a variety of XLR connector configurations.

Not only will it power iOS or 5V compatible devices, but also other items such as a RED remote, or a GoPro from a higher capacity batteries.

The Lentequip Safetap connectors certainly work as advertised and they provide insurance to protect your equipment against short circuits. They are one of those things you hope you never have to use, but you are glad you have it in the event of an accident. You may well be thinking “I would never plug in a power connector incorrectly”, but we all make mistakes. It may not be you who makes a mistake, it could well be someone you are working with who does accidentally plug in something in the wrong way.