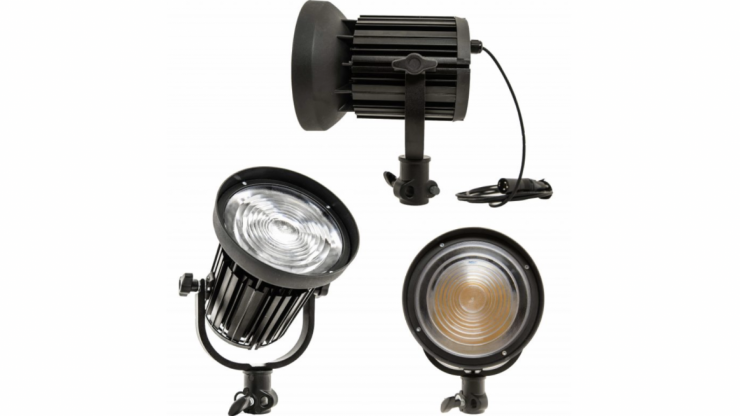 BB&S has announced a new BiColor Compact Beamlight which has a Kelvin color temperature range of 2700°-5700°K.

The BiColor Compact Beamlight is a hard beam fixture with a low 40W power draw, 5.5” footprint, and a 10-degree beam angle.

The lights come as either single or 2×2 units. A Single fixture produces up to 2700-lumens and the 2×2, with its combined beam, provides up to 11,000-lumens. The beams fade from 100% at the center to 50% at the edges. These LED fixtures have been installed for uses up to 90-ft/27-meter distances.

The lights come with a 4-pin XLR, 2-meter cable, TVMP, and adjustable yoke. Optional accessories include a magnetic filter frame range of prismatic diffusers, a magnetic barndoor that rotates 360°, and a magnetic top hat/snoot.

Each Compact Beamlight incorporates a proprietary 126mm diameter collimator lens that converts up to 90% of the LED light output, which is claimed to result in a high-intensity narrow beam with practically no spill light. Even with their strong illumination, they run silent, thanks to a highly effective heat-dissipating rear section that eliminates the need for a noisy cooling fan.

Compact Beamlights can be operated and dimmed in several ways. Singles work with the optional BB&S 4-Way Controller or Dual Channel Driver/Dimmer. The 4-Way Controller runs two Single BiColor fixtures and is ready for optional wireless control with built-in DMX/RDM 512 in/out powered via a 48V power supply. Utilizing the 4-Channel Control, the fixtures are fully dimmable (100% to zero) without color shift or flicker. Single BiColors may also be operated via the optional BB&S 40W Dual Channel Manual Driver/Dimmer to dial in CCT and level. It includes a 4-pin XLR connector for use with either an optional PSU or battery.

The 2×2 BiColor can be operated and dimmed with the optional new 8-Way Controller in a Peli case that offers 8-channels and is ready for wireless via the internal USB connector. It comes with a PowerCon True 1 locking AC 2-meter cable plus 48V DC PSU. For battery operation several third-party battery packs are available that can deliver the 160W minimum required.

The BiColor Compact Beamlight looks to be a good addition and it is certainly more flexible than the original CBL-1.

There is no indication of pricing yet, but the original CBL-1 models reatuil for $450 USD.