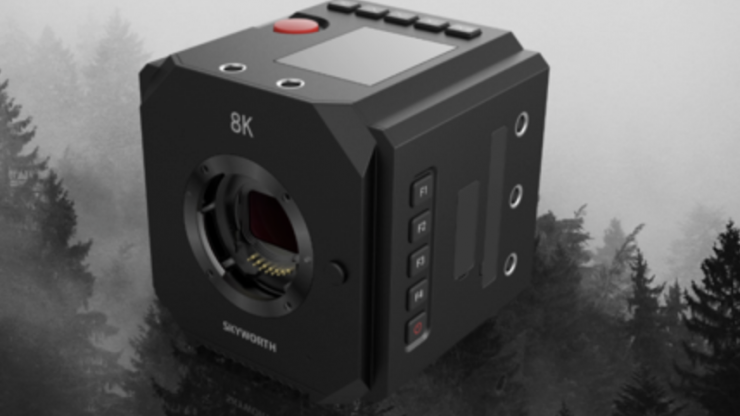 Just when you thought there couldn’t be anymore 8K camera announcements, here is another one. Chinese company Skyworth has announced the LIFErecorder 8K camera.

If you don’t know who Skyworth is, they primarily make Televisions.

The Skyworth LIFErecorder 8K camera uses the same Sharp 8K CMOS image sensor that is used in Sharp’s own 8K prototype camera that we tested in April last year. The single-pixel size of the sensor is 2.45μm x 2.45μm, which is 9 times the single-pixel area of ​​current 8K video phones.

According to Skyworth, this larger light-sensitive area results in better low light performance.

The camera appears to have a Canon EF mount.

The camera looks remarkably similar to some of the Z CAM offerings. It has the same basic shape and size, and the placement of the buttons and top screen are almost identical.

According to Jason Zhan from Z CAM, Skyworth bought one of their E2-F8 cameras and has just copied the body design. Now, we have no way of independently verifying these claims, but the two cameras do look very, very similar. There are only some minor differences.

There is quite a lot of IP theft that goes on in China. Lots of products end up getting copied and rebranded under different names.

It is equipped with an HDMI 2.1 interface, USB 3.0 interface, and a Gigabit network interface.

In terms of live streaming, the Skyworth LIFErecorder 8K camera can be connected to a 5G network and WiFi 6 module through the USB 3.0 interface.

Unfortunately, there is very little information other than what I have mentioned about the camera.

I don’t think this has been designed or is meant for serious professionals. It looks like a Chinese TV manufacturer’s way of trying to get people to buy 8K TVs by selling 8K capable cameras.

The price of the Skyworth LIFErecorder8K camera is 19,999 yuan, which equates to around $2,800 USD. There is currently no information about when the camera will be available to purchase.