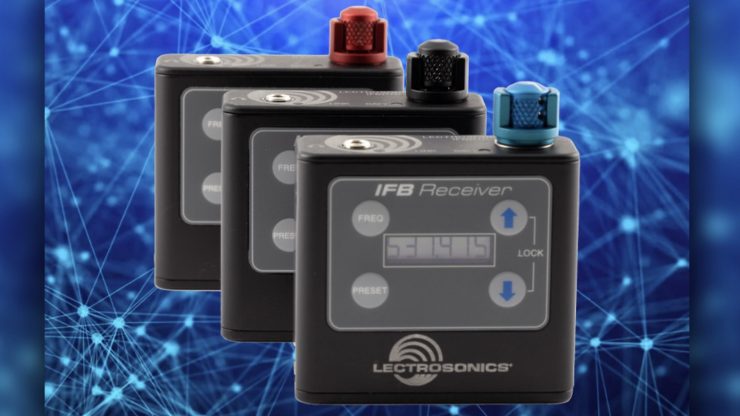 Wireless IFB (interruptible fold back) systems are used for talent cueing and crew communications in broadcast and motion picture production. In other cases, the IFB system is used by directors and other management to monitor program audio during a production

The receiver unit is nearly half the size and weight of the industry-standard IFBR1A receiver that it is replacing and it uses a slim 3.7V LB-50 rechargeable lithium-ion battery instead of the archaic 9V type. The new removable battery will power the unit for up to 8 hours.

It features a backlit LCD and membrane buttons, as well as 10 presets which can be programmed from the front panel.

The design uses +/-20 kHz FM deviation for efficient use of the bandwidth, with compandor noise reduction circuitry for an excellent signal to noise ratio. A supersonic Pilot Tone signal controls the audio output squelch to keep the receiver silent when no transmitter signal is received. The
incoming RF signal is filtered and amplified, then mixed
down to the IF frequency with a microprocessor-controlled synthesizer.
If a monaural earpiece is connected, this condition is automatically accommodated, with no loss of audio output power or battery life. Full output power is available with either type of connector, without the power losses that result from a resistive circuit design. The headphone cable
doubles as the receiving antenna.

The receiver will drive a wide variety of earbuds, headphones and induction neck loops at substantial levels, with loads from 16 Ohms to 600 Ohms.

The new IFBR1B is fully compatible with the existing line of IFBT4 transmitters.

Future firmware updates can be installed in the IFBR1B in the field via the USB jack on the bottom of the unit. The IFBR1B comes standard with a wire belt clip. An optional “clamp” style belt clip, part number IFBR1BBCSL, is also available and can be installed with two small screws.

The system’s new companion dock charging system, the CHSIFBR1B, is capable of charging up to four receivers or four batteries in any combination. The charging dock can be also be ganged in groups of up to four. It is powered by a single power supply, allowing charging any combination of up to 16 units or 16 batteries.