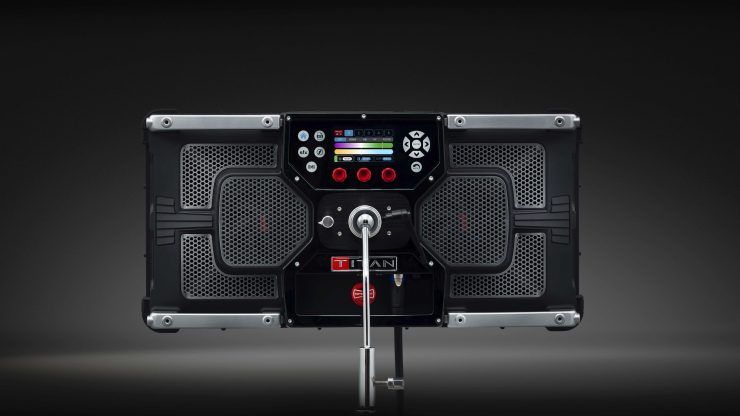 We first saw the Rotolight Titan X2 when it was unveiled at IBC 2019. The X2 Titan is the British company’s first RGBWW fixture, and it comes with a suite of industry-first features.

Finally, it is ready to purchase. The Titan X2 has been heavily pre-ordered by a lot of rental houses around the world.

According to Rotolight, the Titan X2 utilizes state-of-the-art RGBWW technology to provide unparalleled light output, outstanding color accuracy for gorgeous skin tones. The Titan X2 is designed and manufactured in the UK to aerospace standards. The light is individually hand-calibrated and handcrafted using the highest quality materials.

Rotolight is claiming that the Titan X2 is the brightest 2×1 soft light ever made. They go on to say that the fixture delivers more than twice the output of comparable LED lights with none of the added weight. This is a bold claim, given some of the 2×1 fixtures that are already on the market.

The Titan X2 has the ability to electronically vary the beam angle from 68 degrees to 150 degrees. This is something I haven’t seen done before.

The light draws 420W (nominal), which is is quite a lot higher than the 325W (nominal) power draw of the Litepanels Gemini 2×1. You can also only run the Titan X2 at 50% from batteries via a 4-way adapter.

Titan features four secure aluminum handles for rigging and it is available with a variety of mounting options.

The Titan X2 is Kelvin color adjustable from 2800K–10000K. Rotolight says that that the fixture is suitable for high-speed work, as it is flicker-free at any shutter angle or intensity.

The Titan X2 has patent-pending SmartSoft™ technology that electronically adjusts the light’s diffusion, focus, and spread; providing control whilst eliminating the need for gels. SmartSoft™ can be adjusted locally on the light, via DMX or wirelessly. Rotolight says that the Titan X2 has the largest light aperture of any 2×1 fixture.

The Titan X features an LCD touchscreen display interface. Rotolight says that the fixture doesn’t have any complex sub-menus, instead, users are able to access key features with a single touch. The light also features 10 user-customizable presets for instant recall of settings. You can display full-color screen previews of the Titan X2’s extensive filter library allowing users to achieve the exact color they want.

The light has a palette of over 16.7 million colors that are all accessible across five lighting modes: CCT, HSI, RGBW, XY, and Filter. Speaking of filters, the Titan X2 comes with a comprehensive library of more than 1300 industry-standard gels.

The fixture also has continuously variable (full minus green to full plus green) correction.

The light also comes with High-Speed Sync flash (1/8000th) with powerful output and zero recycle time; making it suitable for high-end studio and portrait photographers. Titan comes with an integrated Elinchrom Skyport flash receiver that allows the light to be wirelessly triggered at up to 656ft (200m) with the Rotolight HSS transmitter.

The Titan X2 certainly looks like a very feature-rich and impressive light. We look forward to reviewing one in the not too distant future.