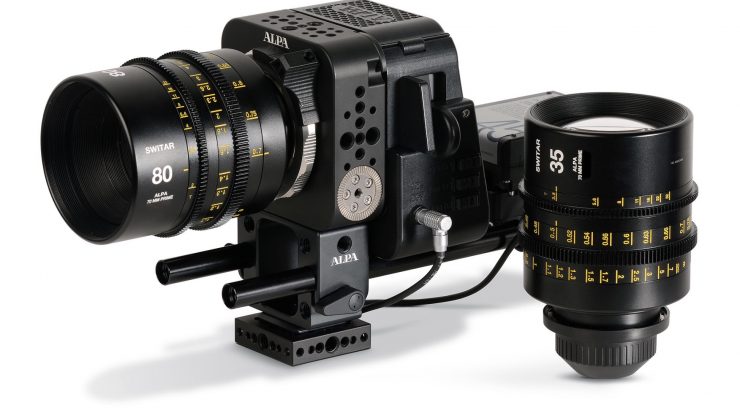 Swiss company ALPA has a new range of SWITAR Cine Primes. Ok, well they are not that new, they were actually announced in July last year, but we haven’t featured them on the site before.

The range covers image circles up to a whopping 70mm, which makes the lenses suitable for use on any of today’s digital cinema sensor formats.

The lenses are available in focal lengths of:

The SWITAR lenses weigh between 1.3kg to 1.9kg. This makes them suitable for handheld and Steadicam work as well as for studio productions.

ALPS states that the lenses offer a core of imaging perfection at T5.6 for absolute craftsmanship and precision and on the other hand an (only slightly tamed) wild soul at wide open (T2.0 to T3.5, with the 210mm a T4.0 is). This behavior goes hand in hand with a pronounced artistic character due to stronger midrange illumination, slightly less contrast, even creamier Bokeh and beautiful flares. But still with the sharpness needed in modern professional production (the trick is not to be too sharp concerning line pairs due to the contrast balance between high and low-frequency areas of the field).

The ALPA SWITAR Cine Primes come with a shimable PL mount as standard. Each lens comes with an individually calibrated adapter mount for the new shimable LPL port. In this way, ALPA has also developed an M88 to M95 filter adapter.

Here is how a cinematographer described the characteristics of the SWITAR Cine Primes (please note that these are just one individual’s views):

The ALPA SWITAR series offers a consistent and homogeneous image across all focal lengths. In terms of optical impression and rendering, each lens embodies two completely different characters: With T5.6, the lenses behave very similar to a Leica Summilux-C or Zeiss Master Prime. Wide-open, the SWITARE’s aim is instead the intermediate realm between an uncoated Thalia and a Vantage T1. This without the excessive lateral chromatic aberration of the T1.

ALPA claims that the SWITAR lenses are faster than their main competitor, the ARRI Prime DNA series. They have 15 aperture blades and tAlpa says that construction is free from the “onion ring problem” that plagues many newer prime sets due to the less sophisticated manufacture of the aspherical elements.

You are going to have to wait a while if you wanted to purchase the lenses. They have only delivered a handful of sets so far. The individual lenses retail for 22,950 CHF. That equates to around $23,360 USD.