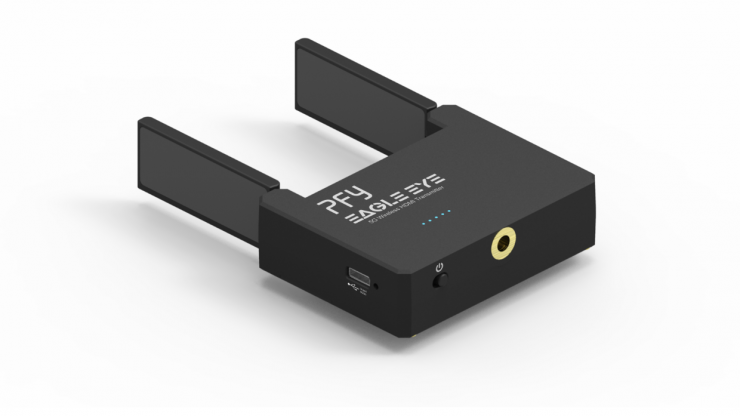 PFY has announced the EagleEye wireless HDMI transmitter that lets you stream video to up to four iOS devices over a claimed range of 100m (328′).

The PFY EagleEye Wifi HDMI Transmitter was designed so that you could utilize your smartphone and tablet as a portable wireless monitor for your camera. It allows for up to four devices to connect simultaneously.

What you clearly need to remember with app-based wireless video systems is the delay is pretty horrible. PFY doesn’t list the latency.

The app not only lets you monitor the image, but you can also bring up monitoring assist aids such as false color, focus peaking, zebras, etc. There is also the ability to use 3D Luts, but there is no information on how you use them or import them into the app.

PFY says that EagleEye allows you to control your Camera through the App. I think what they are referring to is the ability to start-stop recording over HDMI as long as your camera supports that. Unfortunately, there is nothing listed as to what cameras this works with.

Apparently, the app also allows you to take pictures or record the video signal directly on your phone so you can share it directly to social media platforms. There is no information as to what format or quality these videos or photos are recorded in.

Haven’t I seen this somewhere before?

The EagleEye looks almost identical to the Accsoon CineEye Wireless Video Transmitter and it also has very similar specifications. There wasn’t much imagination when choosing the name either.

Here is what they have in common:

The EagleEye is now available to purchase for $149 USD. This is $100 USD cheaper than the Accsoon CineEyes. This arguably makes the EagleEyes the most cost-effective HDMI video streaming solution on the market.