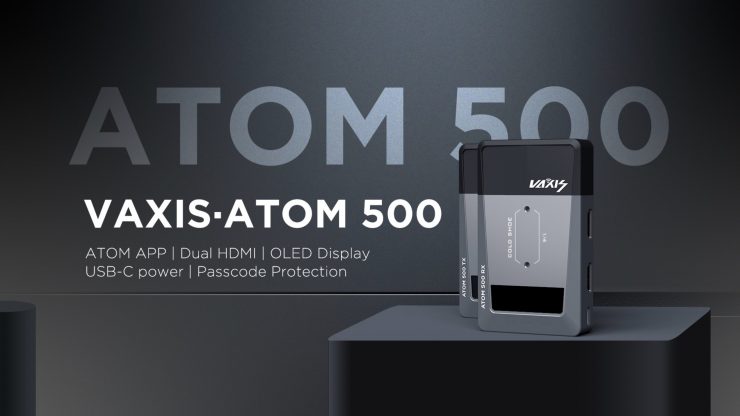 The Atom 500 signals Vaxis entering a new segment of the market. Affordable HDMI wireless video systems have been popping up everywhere lately and I guess it comes as no surprise that Vaxis want a piece of that pie.

Unlike previous products that were aimed at professional users, the Atom 500 is aimed at the Prosumer, YouTube, Vlogger market.

The Atom 500 consists of a HDMI TX and RX unit. Both work on the 5GHz frequency band so you aren’t going to get anywhere near the same operating range of a dedicated wireless video system.

The concept behind the Atom 500 is to give users an affordable and versatile monitoring solution. You can output to a traditional monitor that has an HDMI input, or you can monitor the signal through the dedicated app on an iPad or iPhone.

Unlike most other budget app based wireless video systems, the Atom 500 TX unit has both HDMI In and Out ports, while the RX unit has dual HDMI Out ports. This is a nice feature to have because you can loop a signal out through a monitor.

This does make them quite small, but because they have both full sized HDMI In and Out ports they are going to be larger than some other available systems.

On the front side of the TX and the RX units is a nice OLED display where you can see crucial information and make changes.

Being that the Atom 500 is using the 5GHz frequency channel, Vaxis have introduced a new automatic channel selection by default. The RX and TX units will constantly scan their surroundings and use the best available channel by default. When you are a selling a budget, easy to use wireless system, making it as easy to use as possible is key.

For those who want to select a channel manually, Vaxis gives you that ability as well.

There is also the ability to set password protection so only the people you want to view the signal can.

Both the TX and RX units feature internal antenna units.

What is interesting is that Vaxis is using H.265 encoding for the transmission signal that can be viewed via the app on smartphones and tablets. This is quite clever as it allows Vaxis to send a much better signal while using less bandwidth.

According to Vaxis, the delay is <0.1s latency. In the future, they will release new firmware to shorten the delay.

Sending a wireless video signal that multiple people can view at once on a dedicated app is hardly new. Teradek has been doing this for years, and most recently we have seen seen very cost effective systems from gimbal companies such as Zhiyun.

The Atom App is a stand alone purpose built app for the Atom 500. It allows anyone with an iOS device to view the wireless signal from the TX unit. Up to three IOS devices can be connected at once.

The Atom App is more than just a viewer. It gives you the ability to activate monitoring functions such as peaking, focus punch in, frame guides etc., and even the ability to roll record your camera remotely, as long as it supports HDMI record triggering.

The Atom 500 RX and TX units both have in-built battery plates that can take Sony NP batteries. You also have the option to power it through USB-C.

It is nice that Vaxis gives you two ways of powering the device. I can’t help but wonder whether having an in-built battery would have made sense. If you are trying to keep a wireless systems form factor to the smallest possible size and weight, it doesn’t make a lot of sense to use a battery that weighs more than the device it is powering.

There isn’t much in the way of direct competition. The Atom 500 is more versatile and has a TX and RX unit unlike the Accsoon CineEye Wireless Video Transmitter with 5 GHz Wi-Fi for Mobile Devices.

Teradek has its Serv Pro, but that has both an HDMI and SDI in and uses an app that has far more functionality and features. The Serv Pro can also be connected to 10 IOS devices at once.

There is also the Zhiyun Image Transmission Module Transmount Transmitter for the Zhiyun Weebill S. Although this is designed for the Weebill S it can be used as a standalone wireless transmitter that can be viewed on iOS or Android devices. 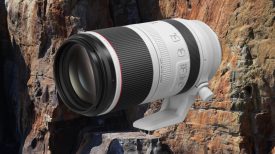