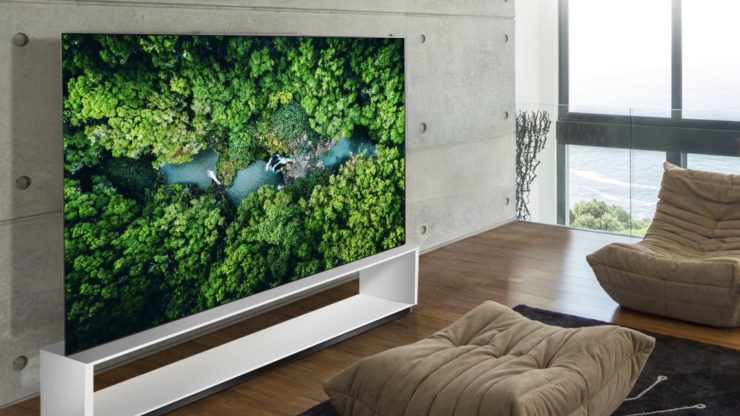 CES officially starts in Las Vegas on Monday and it will come as no surprise that manufacturers are starting the big 8K TV push.

The Samsung Q950TS sets a new standard for TV screens by applying an Infinity design that eliminates the screen bezel, so viewers can utilize up to 99% of the screen. The screen is also only 15mm thick.

In the below press release you can read about the TV.

The TV is equipped with an AI quantum processor that combines machine learning and deep learning. The deep learning method is said to enhance the upscaling which converts the image quality to 8K regardless of the image quality of the original picture. According to Samsung, the new AI quantum processor runs on a neural network model and generates its own algorithm from the trained database, enabling optimal upscaling of any image.

Samsung also has an AI ScaleNet technology that reduces the loss of original data during video streaming. The technology will be applied to Amazon Prime Video apps in collaboration with Amazon.

One of the biggest features of the 2020 QLED 8K is its ability to deliver rich sound. ‘OTS + (Object Tracking Sound Plus)’ is a technology that recognizes moving objects in the video and moves the sound along the speakers mounted on the TV. This technology enables 5.1-channel surround sound on a TV, allowing you to immerse yourself in a fast-moving scene.

Samsung will also introduce a new “Q-Symphony” feature, which will use both the TV and the soundbar’s speakers.

It also features an ‘AVA (Active Voice Amplifier)’ feature, which allows the TV to recognize ambient noise and adjust the volume of the video speaker’s voice. With this feature, consumers don’t have to worry about losing drama lines even in noisy surroundings.

Samsung Smart TV users will be able to watch free of charge TV Plus, which will provide more than 120 global channels this year in various fields such as news and movies.

One of the notable changes is the ease of connecting TVs with other devices. ‘Tap View’ is a new feature that allows you to ‘Mirroring’ just by touching your smartphone to your TV.

In addition, a ‘Digital Butler’ function was introduced to allow the TV to recognize and control not only devices connected via Wi-Fi or Bluetooth but also older devices not connected to the Internet.

The 2020 QLED 8K has also expanded its voice recognition service. In addition to Samsung Bixby, which is optimized for TV function control and content experience, Amazon Alexa and Google Assistant are installed to improve consumer convenience.

LG states that not only does its 8K TVs deliver Real 8K, but they are also future-proofed to provide customers peace of mind with multiple ways to enjoy the Real 8K experience. The new models offer the capability to play native 8K content thanks to supporting the widest selection of 8K content sources from HDMI and USB digital inputs, including codecs such as HEVC, VP9 and AV1, the latter being backed by major streaming providers including YouTube. LG’s 8K TVs will support 8K content streaming at a rapid 60FPS and are certified to deliver 8K 60P over HDMI.

LG’s AI Sound Pro analyzes and classifies the audio of content among five categories –music, movies, sports, drama or news – for clearer voices and richer, more textured background sound. Spoken words are isolated and their volume increased, making it distinctively easier for viewers to understand while background noises are identified and the scene up-mixed to virtual 5.1 surround for a heightened level of viewer immersion.

LG 8K TVs offer a new level of convenience made possible by AI technology. Users can monitor and control compatible IoT devices directly from the TV’s Home Dashboard, while Hands-Free Voice Control allows viewers to easily control multiple connected devices with just their voice, even from across the room. Available in 144 countries, ThinQ voice recognition is built into every LG 8K TV. And with LG’s popular smart TV platform, webOS, the new TVs support Apple AirPlay 2 and HomeKit as well as both Google Assistant and Amazon Alexa, with Amazon Alexa Premium Far-Field Voice compatibility in the future.

Make no mistake, the 4K, and now 8K push is coming directly from manufacturers whose whole business revolves around selling products. If people are perfectly happy with their HD TVs how do you convince them that they need something better? Well, you use a lot of marketing terms and you play some fantastic looking material that was shot in 8K to get consumers to part with their hard-earned cash.

Now, I have nothing against 4K or 8K, but the biggest problem is still the lack of true native content that can be consumed in 4K, let alone 8K. Yes, we continually hear about the Tokyo 2020 Olympics being broadcast in (8K by NHK, but you can only watch that in Japan if you go and buy an expensive decoder box and an 8K TV. Even here in Japan where I live, there is hardly anything being broadcast in 4K.

Yes, there is 4K material out there, but you have to pay for it and you need to know where to find it. If you are watching a lot of streaming content through something like Netflix and you have a decent internet connection then a 4K TV makes sense, but what are you going to do with an 8K TV?

The problem is anything that isn’t being broadcast or streamed in 1080,4K or 8K needs to be upconverted to be displayed on your TV. Modern TVs will take any signal being fed into them and then upconvert the signal to match the resolution of the screen you are using. The problem is, this often looks horrible. I see so many people watching upconverted 720p images from their cable boxes on 4K TVs and the picture looks terrible. Why? Because your TV is taking a 1280 x 720 signal and trying to convert it into 3840×2160. For your TV, it is like trying to pull a rabbit out of a hat. While it does the best job it can it is essentially trying to turn a glass of milk into a carton of milk.

People then start complaining about their TV and wondering why they paid so much money for a set that looks horrible. In fact, they shouldn’t be blaming the TV they should be blaming the input source. Now, if we have an 8K TV, imagine what is going to happen when we try feeding it a 720p signal!

High-end receivers and Blue Ray players can have better upscalers inside them, but again, they can only do so much.

Until there is much more 8K content available I see very little reason to purchase an 8K TV. It is not like a camera where 8K produces better 4K images. With a TV you are going the opposite way where you are going to have to watch a lot of content that is being upscaled from lower resolutions.

What do you think of 8K TVs? Would you buy one? Are you still waiting for more 4K content? Let us know in the comments section below.