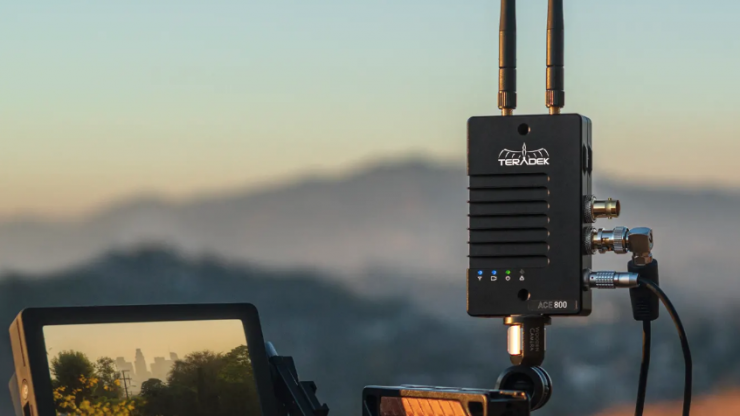 The Teradek Ace 800 is being touted as an affordable, zero-delay, HD wireless video system with a range of up to 800 ft. Teradek says that it is designed with the same reliability and performance as the Teradek Bolt line.

It looks to me as the Ace 800 is almost a bridge between the Ace 500 and the Bolt series.

Teradek claims that the Ace 800 can provide HD picture quality with zero delay. It features an intelligent RF design that enables users to transmit over the 5GHz band.

You can end 1080p60 video from one transmitter to up to four receivers simultaneously, but please be aware that this only works when using Ace 800 RX units.

The wireless system has been designed to adapt to whatever camera rig you are using. The 800 features three built-in ¼-20” mounting points for camera arms or hot shoes and an optional mounting bracket.

Unfortunately, if you want to power the Ace from a small-sized battery you need to purchase an optional battery plate that can attach directly to your transmitter. These plates include dual Sony L-Series and Canon LP-E6, BP-U, and BP-9. You can also power the receiver with optional Gold or V-Mount battery plates.

The Ace 800 transmitter only has an SDI In and an SDI OUT. The RX unit has both HDMI and SDI outputs. I would have preferred to have sen Teradek put an HDMI input on the TX unit as this would have increased its versatility and allow users to move it between different camera systems that may only have HDMI or SDI outputs.